The sun’s full spectrum of light produces two types of radiation that are useful for energy production. Most solar systems take advantage of one type of radiation, but some newer systems are now taking advantage of both. That’s why there’s an increase in the number of solar hybrid systems now becoming available on the market. They generally produce electricity via photovoltaics and then also solar thermal energy that can be used in other applications, like heating—and yes cooling—a home or building, or for heating a home’s or building’s hot water.

In the past however, most solar systems had just been either a solar thermal system or a photovoltaic systems. The former takes advantage of the sun’s thermal or infrared energy, producing heat, which can be harnessed for solar hot water, like the solar thermal panels on rooftops—it can also be reflected and concentrated on a point. This is the type of solar used in most concentrating solar applications, like power towers and trough systems.

The other type uses photovoltaics to collect photons from certain wavelengths of solar radiation. These use semiconductors, typically silicon-based, but increasingly from a variety of materials, that can directly convert the photons into electrons and electricity.

Since neither collect all the energy some of it has traditionally been wasted. But companies like EchoFirst and Cogenra are figuring out ways to harness a lot more of the sun’s energy.

EchoFirst’s Echo+ uses conventional silicon PV modules, which when mounted on a rooftop actually collects a lot of heat—after all they’re typically black in color, which absorbs the most heat, but instead of squandering it, the system collects it. It uses a fan system to draw the heated air under the panels on the roof and moves it though an energy transfer module. The energy transfer module directs the sun’s thermal energy to the building’s hot water system, and excess heated air is used to heat the home when it’s needed. And in the evenings it uses radiative nigh time cooling to provide home cooling. 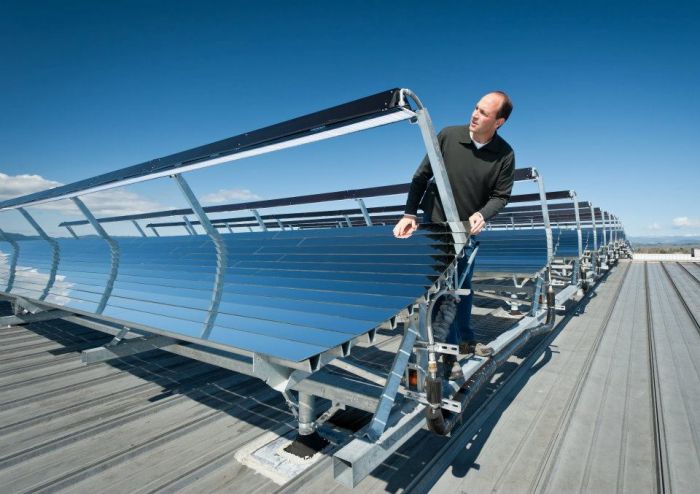 The Cogenra system is quite different. It uses a series of mirrors, arranged in a parabolic trough to concentrate solar power on a strip of silicon PV cells. Since the sunlight is concentrated, so is the excess heat. The device has a fluid heat transfer mechanism behind the silicon PV cells, that helps to reduce the heat on them. That heat gets up to 200 degrees Fahrenheit, which is more than enough for just hot water and enough to use to drive a chiller for a large building. Recently (Feb. 2013) Johnson Controls actually chose to use Cogenra’s system with its York line of chillers to produce a solar-powered chiller for its customers.

Brown Universty in Providence, RI in 2011 installed at the time what was the country's largest hybrid system.  Consisting of 162 panels from Sundrum Solar, it generated hot water to heat it's aqautic center's pool while at the same time generating electricity for the building.  The Sundrum system. like Echo+, is also a modification of a typical PV panel in that it is a bolt-on addition that circulates fluid underneath.  The fluid flowing thru the back of the PV panels keeps the system up to 40 degrees cooler and thereby increases the efficiency of the electricity generation by 5-10%.

Look for more of these systems to hit the market in coming years as the technology improves and simplifies.

Utility-scale solar power generation is now substantially more efficient in terms of the amount of land it uses for electricity generation than a decade ago. END_OF_DOCUMENT_TOKEN_TO_BE_REPLACED

END_OF_DOCUMENT_TOKEN_TO_BE_REPLACED

END_OF_DOCUMENT_TOKEN_TO_BE_REPLACED
Calculate How Much You Can Save By Going Solar!
Use The Web's Best Solar Calculator!