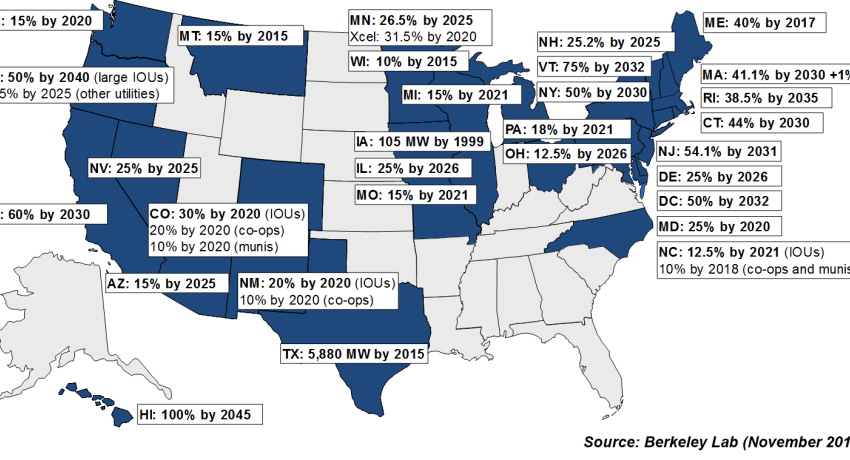 In the United States many states have introduced special legislation called Renewable Portfolio Standards (RPS) – which mandates the state to promote the use of renewable sources of energy for generating electricity. Mainly these have been seen as one way to tackle the problem of climate change as well as support local solar and wind energy industries.

The details of these laws can vary quite a bit from state to state such as their goals and limitations. For instance, some states may produce more energy than they consume, and export a part of the excess to other states. Here we attempt to explain more about RPS's but realize that states are constantly updating these standards. Refer to our section on state rebates and incentives to see what your state is currently doing as far as legislation around these laws.

Currently many states consume less energy than they produce, and hence need to import electricity from utility companies and power plants based in other states. This ratio of total energy generation against total energy consumption directly impacts the RPS laws in a state.

Stemming from this, states can also vary in the way they apply RPS laws across energy and utility companies within the state.

For instance, some states may meet their numbers by mandating that a certain percentage of total energy produced or consumed within the state is from renewable sources.

Again, other states may mandate that a minimum amount of energy, measured in megawatts of power, is produced or consumed from renewable sources.

Regardless of these differences, RPS measures are typically set against a timeline (as described below). For this reason, all utility and power companies within the state are bound by the state’s RPS guidelines.

In fact, if a power or utility company fails to adhere to the state’s RPS measures, it can be heavily fined by the state!

This is perhaps the most significant aspect of the RPS, as it encourages power companies to offer enticing incentives to homeowners, in order to meet its need of generating electricity from renewable sources.

Why and how are RPS laws set and implemented?

The United States government is committed to making America a source of clean, green energy. Hence, RPS is essentially a mechanism used by state governments, in order to ensure that more electric and utility companies use renewable sources of energy to generate power.

For this, the state government works with both scientific and energy affiliations within the state. Based on this, promising yet achievable RPS goals are set for the state. These align to a set future target, with provisional targets to meet the main goal.

For instance, consider the case of California, which has a set a goal of achieving all of its retail energy sales through renewable sources, by the year 2045.

In order to meet this, several interim targets have been set, typically with a gap of 4-5 years, so the state gradually builds up to this main target of 100% renewable energy.

Finally, this is passed as a law within the state, and requires 100% compliance from power plants, utility companies and other energy companies within the state. Hence, failure to adhere to the state’s mandated RPS numbers can cause a company to incur heavy fines, or more serious penalties.

Incentives provided to the public for renewable technology

Energy and utility companies require the support of commercial and residential owners, in order to meet the state’s RPS numbers. For this, the state’s RPS laws also include the provision of incentives for using renewable technology. These could be in the form of tax credits, rebates, and RECs (Renewable Energy Credits).

Solar rebates are a common example, where the government offers a part of the system cost – including solar panels, solar roof tiles, etc. – as a money-back offer. However, the rebate amount is not paid back to the homeowner in actual cash. Instead, they can use it as credit to pay for monthly utilities.

These work more like cash-back offers, derived as a percentage of the total cost of the renewable system (like solar panels).

Again, these vary across states, and can have maximum limits that apply to a homeowner in a fiscal year. However, some states may include a carryover system, so the amount beyond the max limit can be carried over to the next fiscal year.

Furthermore, the total number of RECs collected in a month can be sold to an energy/ utility company, in order to meet the company’s RPS goals.

This system can also enable the exchange of energy. Here, the homeowner accumulates a certain amount of RECs for the solar energy generated in the house.

This can be used in exchange of electric power from a utility company, to power appliances at night. An if the power used in the house is less than the total cost of RECs, the electric company pays the homeowner an equivalent amount.

Do all sources of energy fall under RPS laws?

For instance, some states – like California, which is struggling financially in many ways – includes hydropower as a renewable energy source. However, there are several conditions attached to this, so not all energy produced from this source is considered renewable.

In North Carolina which is doing well economically, RPS laws also include waste collected from poultry and swine. In Connecticut – fuel cells are included in RPS laws. And in the states of Virginia and Michigan, solar energy can get you twice the amount of RECs gained from other renewable sources.

In recent times, some states have experienced a push to include RPS laws and RECs for energy generated from nuclear plants. But while these do not leave a carbon footprint, they are still seen as clean energy, but not renewable energy. Hence, individual state policies would apply.

Summary of RPS Portfolio of the States

At present, there are two government bodies which analyze and compare date from different states, based on their RPS portfolio.

This includes the Database of State Incentives for Renewables & Efficiency (DSIRE), and the National Conference of State Legislatures (NCSL).

However, this footprint is expected to grow significantly in the coming years, as the government offers fresh incentives for homeowners to willingly invest and contribute to a national renewable energy footprint.

Is the Use of RPS Growing?

While the US federal government may have diluted policies that would boost the renewable energy sector, the state and local governments are intensifying their efforts and promoting RPS. Many states have been focusing on raising their renewable energy targets, and some are even aiming to achieve 100 percent renewables.

As of now, according to a Deloitte report, more than 50 percent of the states with Renewable Portfolio Standards are set to achieve their targets by 2021.

Municipal governments have also recently begun to introduce renewable energy targets. By the end of 2018, mayors of over 200 communities across the country had adopted a goal of 100 percent renewable by 2035.

Hawaii was one of the first to come out with a 100 percent renewable target, followed by California though both of these states are doing that well economically – certainly the latter.

Michigan and Washington DC also have been mulling a 100 percent goal. A number of other states, including New Jersey, Connecticut, Massachusetts, and Vermont have also substantially boosted their RPS targets, even though they stopped short of 100 percent.

Municipal programs such as CCA (community choice aggregation), which bring together residents, local businesses, and municipal accounts to procure energy are now increasingly inclined in favor of renewable energy growth as well as promoting new business models along with community solar and wind developers.

In simple terms, a rising demand and a strong push for renewable development at the state, municipal and community level is ushering in an era of growth and opportunity in renewable.

With a consistent increase in RPS targets, states will be able to create an adequate cushion against any potential policies at the federal level that could impact the competitiveness of renewable energy.

Why should the Homeowners Care?

The impact of Renewable Portfolio Standards on consumers is beginning to show. In many cases, homeowners are seeing a reduction in electricity bills due to RPS policies. Since 2009, the costs of wind energy have come down by 70 percent, making it the cheapest electricity source in several parts of the country.

An LBNL (Lawrence Berkeley National Lab) study in 2016, in fact, showed that renewable power generated to meet state RPS requirements had lowered consumer electricity costs by up to $1.2 billion in 2013.

For instance, Colorado’s biggest utility Xcel has estimated that the state’s RPS will eventually save consumers more than $100 million over a period of 25 years.

RPS policies, according to the LBNL report, will benefit the US economy and the environment which is not something Germany has figured out how to do on both accounts and what the French government is doing in terms of fuel prices is causing riots in that country. Moreover, the report, which examined the future impact of RPS policies from 2015 to 2050, showed that meeting the existing RPS goals will help create employment to the tune of 4.7 million jobs.

Air pollution reduction due to RPS-driven renewable will generate $258 billion in environmental and health benefits, along with a reduction of four percent in energy-related water consumption.

These benefits, in most cases, will be achieved at no net cost to the consumers. In some cases, electricity bills could come down by up to 2.4 cents per KWH.

Utility-scale solar power generation is now substantially more efficient in terms of the amount of land it uses for electricity generation than a decade ago. END_OF_DOCUMENT_TOKEN_TO_BE_REPLACED

END_OF_DOCUMENT_TOKEN_TO_BE_REPLACED

END_OF_DOCUMENT_TOKEN_TO_BE_REPLACED
Calculate How Much You Can Save By Going Solar!
Use The Web's Best Solar Calculator!