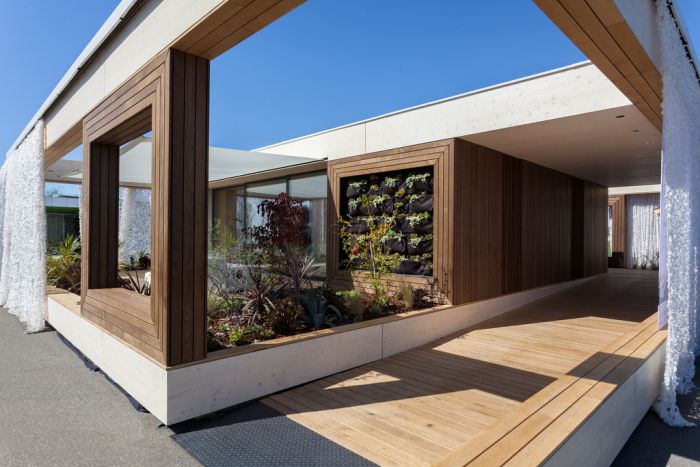 This was the first year Team Austria had an entry in the U.S. event, which has taken place every two years since 2002.

Team Austria won first place in communications and tied with others for first place in the hot water and energy balance competitions, which measured the house’s ability to keep up with typical household hot water demands, as well as whether it's solar panels could produce more electricity than it would use.

Team Austria took second place in market appeal and tied for third in engineering. It ranked 14th in affordability amongst the 19 houses at the competition, but emerged as the winner of the all-around competition.

“The house adapts to a range of climate zones and flexes to meet a variety of lifestyles,” according to the team’s literature.

The house’s flexibility was fully demonstrated at the Solar Decathlon during the first week of the event, when aggressive Santa Anna winds forced the competition to close for a few hours one afternoon.

The house, which was usually wide open to take full advantage of the expansive deck space, was shuttered to protect visitors from the dusty desert gusts.

When wide open, the house seemed to almost have no walls or windows, but to be a simple airy shelter. It stood out from the competition, draped in a willowy white mesh. When closed, it looked more like some of the other homes with big windows and decks.

That stark contrast between the open and closed home was no accident. since Team Austria wanted to build LISI with two distinct personalities – extroverted and introverted.

The house was built with wood, which is considered to be one of the most sustainable construction materials. The team also used vegetation as natural shading during the summer.

The University of Las Vegas, Nevada took second place in the competition and Czech Technical University came in third.

The winners were the teams judged to best blend affordability, consumer appeal and design excellence with optimal energy production and maximum efficiency.

END_OF_DOCUMENT_TOKEN_TO_BE_REPLACED

With the launch of SolarAPP+, it is expected that solar energy suppliers will be more amenable to providing services in remote areas, as it will make it easier to conduct code inspections and ensure compliance to get their requests approved faster. END_OF_DOCUMENT_TOKEN_TO_BE_REPLACED
Calculate How Much You Can Save By Going Solar!
Use The Web's Best Solar Calculator!