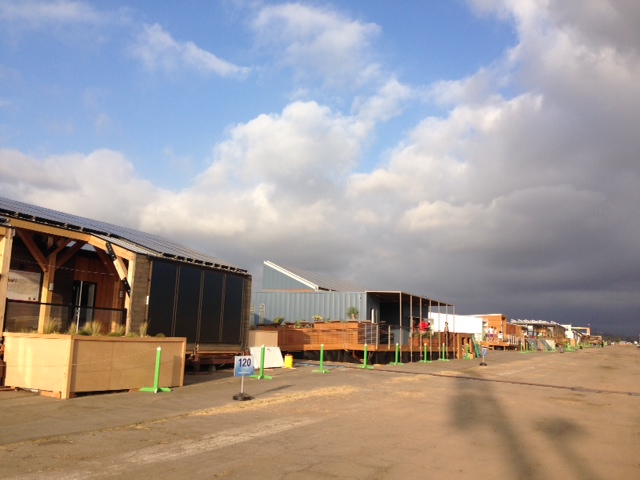 As of Thursday afternoon, the 19 solar-powered houses assembled at the Orange County Great Park in California for the U.S. Department of Energy Solar Decathlon had produced 4,672 kilowatt hours of electricity since they went up on Oct. 2.

Teams of college students engineer, design a d build energy efficient solar-powered houses and bring them to the DOE competition every two years. This is the first year the Solar Decathlon, which started in 2002, hasn’t taken place on the National Mall in Washington, D.C.

Energy balance , which is how much electricity a solar house produces in comparison to how much it consumes, is one of the 10 competitions Solar Decathlon entries are judged in.  Measuring energy production and consumption, as well as making sure the power produced in the pop-up neighborhood is properly managed and directed, is one of those unseen triumphs, however.

Schneider Electric has sponsored the last three U.S. Solar Decathlons.  Two other sponsors are abroad.  In addition to donating equipment to individual teams, Schneider supplied individual meters for each house, in addition to monitoring equipment that will be used to judge the energy balance portion of the competition.

The company also developed and donated the microgrid that connects all the houses together in this year’s competition.  The microgrid sends unused energy to a second microgrid in the Great Park, which is controlled by the Navy, said Phil Davis, Director of Smart Grid Solutions for Schneider.

The Navy has been able to use all the excess energy, Davis added, which means there hasn't been excess power on the Southern California Edison grid yet.

Schneider has long believed in renewable resources.  The company has evolved from a simple manufacturer of traditional electric control devices to an organization that now gets  35-40 percent of its global revenue as a direct result of renewable energy investment.

“So, obviously, it’s not just a belief. It’s paying off,” Davis added. “The Solar Decathlon is an opportunity for us to showcase what we can do.”

Schneider has been working with the government to develop microgrids like the one being used in the Solar Decathlon for use on military bases. Energy independence and having the ability to island bases from the rest of the grid so they can continue running on their own on-site generation has become a priority for national security.

Microgrids are becoming more popular in smaller commercial circles as well. While Davis said he didn’t know of any individual neighborhoods present pursuing their own microgrids, he did mention that the state of Connecticut has commissioned a pilot project to create separate microgrids.  Schneider is working on four of them.

Some co-ops in New York City are also pursuing microgrids as a way to avoid long hopeless power outages like those that were experienced after Hurricane Sandy hit the city a year ago.

Davis said he didn’t know if the Solar Decathlon was generating any more electricity this year than it has in the past, but he said students are definitely using fewer solar panels and smaller solar arrays as the technology becomes more efficient.

END_OF_DOCUMENT_TOKEN_TO_BE_REPLACED

With the launch of SolarAPP+, it is expected that solar energy suppliers will be more amenable to providing services in remote areas, as it will make it easier to conduct code inspections and ensure compliance to get their requests approved faster. END_OF_DOCUMENT_TOKEN_TO_BE_REPLACED
Calculate How Much You Can Save By Going Solar!
Use The Web's Best Solar Calculator!