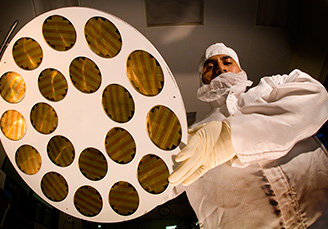 Over the past year, the records for most efficient PV cells continue to fall, showing that the industry continues to push forward with new technological innovations. In fact, Boeing’s Spectrolab announced yesterday (Nov. 18) that its newest multi-junction PV cell converted 38.8 percent of the sun’s light into electricity—without concentration.

The new record surpasses Spectrolab’s previous record by 1 percent, a spokesperson for the company said. The new record also comes only about half a year after Boeing announced the former record.

The device uses a new Boeing semiconductor bonding technology. "Improving solar cell manufacturing technology is at the core of what we do at Spectrolab,” said Spectrolab President Troy Dawson. “We will continue to innovate new ways to achieve even better results.”

The cells that Spectrolab is producing aren’t the same type as those in rooftop solar array. Cells in most rooftop arrays are usually crystalline silicon photovoltaics. The cells Spectrolab is developing use a series of more expensive semiconductors like Gallium, Indium and Arsenide layered and tuned to absorb different spectrums of the sun’s light. The resulting cells are much more efficient but also much more expensive.

Increased production and Boeing’s new, larger manufacturing facility opened earlier in 2013, coupled with the company's ability to manufacture the cells from larger wafers—as well as other high-efficiency PV makers around the world—are helping to bring the cost of the cells down.

Cells like those that Boeing is developing are used for more specialized purposes, like space exploration, spacecraft or unmanned aerial vehicles, according to Spectrolab. They’re also used in more terrestrial applications when used in concentrators. At this point, the highest levels of efficiency under concentration were achieved by Soitec and the Fraunhofer Institute For Solar Energy Systems. In October, the cells were able to convert 44.7 percent of the sun’s light into electricity under the concentration of 297 suns. Soitec and its partners anticipated that they could break the 50 percent barrier with future efficiency increases.

The cells are also much smaller than conventional silicon PV cells. As such, an inexpensive concentrator, like a Fresnel lens, can be placed over the cell, allowing the lens to concentrate the sun’s power on the cell hundreds of times, reaching those higher efficiency levels.

Utility-scale solar power generation is now substantially more efficient in terms of the amount of land it uses for electricity generation than a decade ago. END_OF_DOCUMENT_TOKEN_TO_BE_REPLACED

END_OF_DOCUMENT_TOKEN_TO_BE_REPLACED

END_OF_DOCUMENT_TOKEN_TO_BE_REPLACED
Calculate How Much You Can Save By Going Solar!
Use The Web's Best Solar Calculator!