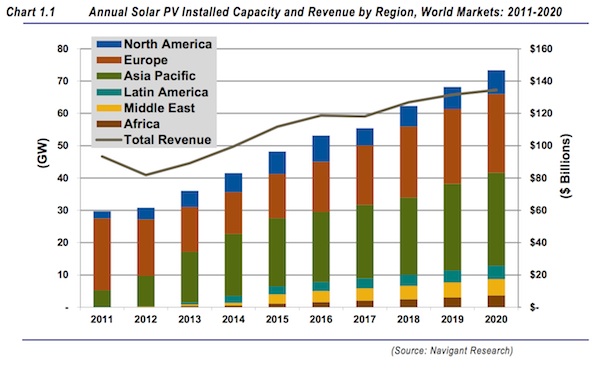 Solar photovoltaic installations will be cost-competitive with more traditional electricity sources by 2020, according to a report released earlier this week.

Navigant Research, a firm dedicated to researching emerging technology markets for investors, recently released its Solar PV Market Forecast. The report explores the increasing affordability of solar as well as the expiring incentives and subsidies globally.

The market has been around long enough and seen enough growth that researchers now have the data and tools to accurately forecast its growth, Navigant asserts.

“Following years of solar PV module oversupply and unsustainable, often artificially low pricing, 2013 is expected to be the year that the global solar PV market begins to stabilize,” according to the executive summary.

Solar panel prices dropped from $4 per watt in 2006 to less than $1 per watt in 2012, the report states. While Navigant predicts the dramatic price drops witnessed in the industry over the last seven years will slow, prices will continue to fall as research and development teams find new ways to build more efficient solar panels for less and as installers and local governments find innovative ways to rein in soft costs.

The solar PV investment tax credit is set to expire in the United States in 2016 and many industry insiders suspect solar should be self-sustaining without the need for any subsidies or incentives by 2017.

The U.S. incentive isn’t the only one sunsetting in the next few years, however. Countries including Germany, Italy and China are also beginning to phase out their feed-in-tariffs, which were designed to encourage widespread and rapid solar industry growth by paying more than the retail rate of electricity for solar electric generation.

In addition to falling technology and permitting costs, Navigant predicts that innovative financing models, such as the third-party ownership and solar leasing programs from Sunrun and SolarCity, will give the industry another boost. Those programs, which enable homeowners to install solar and pay less for electricity in most cases than they pay to the utility, allow homeowners to install solar with no upfront cash.

With growing solar adoption, Navigant predicts that installed solar will double globally by 2020 and that this much larger market will be able to support lower per watt costs.  If solar does fall as low as predicted, it’s good news for the industry.

“If this price range is realized, solar PV will largely be at grid parity, without subsidies, in all but the least expensive retail electricity markets,” the report reads.

Utility-scale solar power generation is now substantially more efficient in terms of the amount of land it uses for electricity generation than a decade ago. END_OF_DOCUMENT_TOKEN_TO_BE_REPLACED

END_OF_DOCUMENT_TOKEN_TO_BE_REPLACED

END_OF_DOCUMENT_TOKEN_TO_BE_REPLACED
Calculate How Much You Can Save By Going Solar!
Use The Web's Best Solar Calculator!