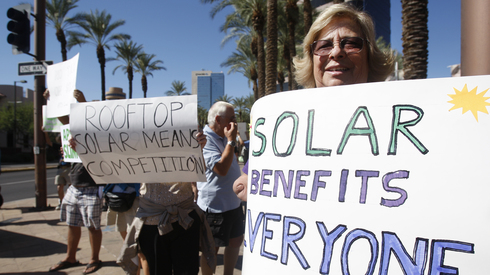 The battle between solar advocates and Arizona Public Service, an investor-owned utility, is growing increasingly contentious as net metering supporters call for the utility to reveal whether or not it spent ratepayer funds on campaigns to defeat rooftop solar subsidies.

APS has admitted to spending $9 million on communications related to their campaigns against retail competition and net metering for rooftop solar.

As a result of this admission, The Alliance for Solar Choice (TASC), a solar advocacy organization, is calling for the Arizona Corporations Commission to investigate the company’s spending. TASC is also asking for trade organization Edison Electric Institute to publicly condemn APS’s so-called 'dark money' tactics of secretly funding out-of-state nonprofit groups 60 Plus and Prosper HQ to pose as grass-roots organizations comprised of concerned citizens fighting against solar in Arizona. The Arizona Republic uncovered evidence that the utility funded the phony controversy efforts through political consultant Sean Noble, something APS ultimately admitted to doing.

Arizona Corporations Commissioner Bob Burns is calling for an investigation into APS'a anti-solar and anti-retail competition spending to see if it was an abuse of ratepayer funds.

TASC issued a press release, revealing that it has spent $336,000 so far and expects to spend another $100,000 before the end of November.

While the amount is far below APS’s admitted $9 million, TASC is not the only organization funding pro-solar messages in Arizona. Several other industry organizations are also working in the state.  These efforts, however, are funded by private citizens and established solar businesses rather than utility ratepayers.

APS has said it would respond to Burns’ query, but would not reveal the details of its campaign spending to the general public.

“We call on APS to disclose to the public all spending on lobbying and public relations related to net metering, as well as those related to retail competition,” the TASC release reads.

In addition to questioning the use of ratepayer money for political campaigning, TASC is asking trade group EEI, which published a report earlier this year calling distributed solar power generation a “threat” to the traditional utility model, to publicly disavow APS for funneling money to inauthentic nonprofits and to say whether it supports such “dark money tactics.” TASC Is also questioning whether the organization uses the same tactics itself.

"APS lied to regulators and the public for months," said Bryan Miller, co-Chair of TASC and Vice President of Public Policy and Power Markets for Sunrun. "EEI should give a firm 'yes' or 'no' on their own use of dark money, and whether or not they endorse APS' tactics."

Nano diamond batteries have the impressive ability to retain its charge, not just for a year or two, but for thousands of years! END_OF_DOCUMENT_TOKEN_TO_BE_REPLACED

In 2020, wind power generated over 300 terawatt-hours, or 7.29 percent of the total electrical energy in the country, surpassing hydroelectric power as the biggest source of renewable energy in the US. END_OF_DOCUMENT_TOKEN_TO_BE_REPLACED
Calculate How Much You Can Save By Going Solar!
Use The Web's Best Solar Calculator!