APS customers fighting back against utility proposal to hike fees 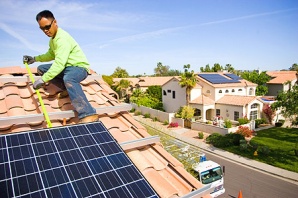 The Alliance for Solar Choice filed a formal protest with the Arizona Corporation Commission asking it to reject proposals from Arizona Public Service to levy fees on its solar customers or dramatically reduce its net metering program.

The net metering issue has become increasingly contentious in Arizona since APS submitted its proposal to alter its solar program on July 12. APS, stating that customers with residential rooftop solar arrays are not contributing to grid infrastructure and maintenance costs even though they use the grid, asked the commission to allow it to levy fees of an additional $50 to $100 a month on new solar customers’ bills or to pay the market rate rather than retail rate for the excess power solar customers generate.

The response from customers, including much of the state’s conservative Republican base, has been largely negative. While solar has long been thought of as a democratic and environmental priority, an advocacy organization called Tell Utilities Solar won’t be Killed was founded primarily by conservative republicans who believe solar is a free-market alternative to monopoly utility power.

In response to the negative reaction, groups like Virginia-based 60 Plus, which is supported in part by the notorious Koch brothers, began airing attack ads on solar and particularly against solar leasing companies Sunrun and SolarCity.

The source of funding for the adds was undisclosed and TUSK leaders along with unaffiliated customers accused APS of funneling money to the 60 Plus and other organizations to place the advertisements.

The formal protest is just one of the ways the solar industry and the utility company’s solar customers are fighting back against APS, said Bryan Miller, president of The Alliance for Solar Choice.

Customers have left angry comments on the company’s facebook page and the organization has posted its own add, featuring several of APS’ solar customers who say they feel the utility is attacking them.

“I think this is a really dramatic point,” Miller said. “This is something that has never been done before – a company attacking its own customers. I think it’s a very dangerous thing for a business to do. They’re damaging their brand.”

The counterpunch of the Arizona customers could pack a wallop, Miller said. TUSK and other solar advocacy organizations are reaching out with information about solar and net metering, arguing that the capital investments solar customers have made on their own help the utility avoid investing in transmission infrastructure provide more than $34 million a year in uncompensated benefits to all APS customers, according to a release from TUSK.

Bigger Wind Turbines Are On The Horizon

Wind turbines to harness wind energy is one of the more effective methods of using a renewable energy source. Despite climate change and the accompanying impact on the planet which is unknown and unpredictable, wind energy remains available and can be depended on for power. END_OF_DOCUMENT_TOKEN_TO_BE_REPLACED

Nano diamond batteries have the impressive ability to retain its charge, not just for a year or two, but for thousands of years! END_OF_DOCUMENT_TOKEN_TO_BE_REPLACED

US House Ways and Means Subcommittee on Select Revenue lawmakers have reintroduced the GREEN (Growing Renewable Energy and Efficiency Now) Act termed critical for solar industry END_OF_DOCUMENT_TOKEN_TO_BE_REPLACED
Calculate How Much You Can Save By Going Solar!
Use The Web's Best Solar Calculator!