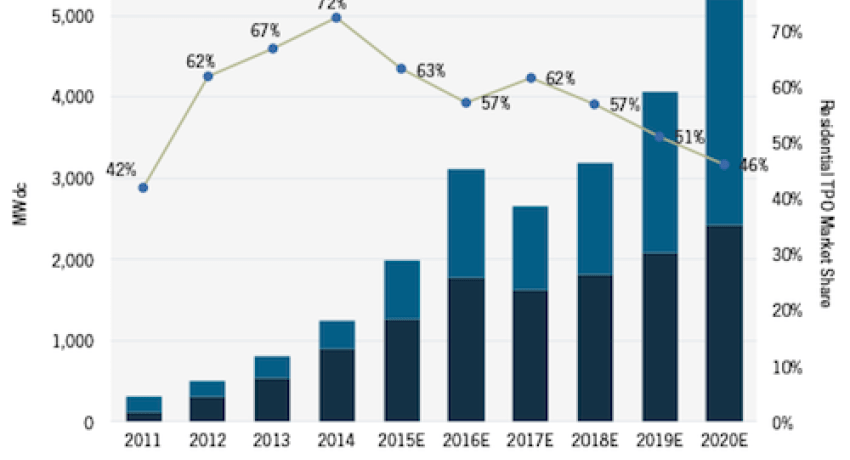 For the first time ever, residential rooftop solar installations outpaced non-residential solar in the US in 2014. That’s thanks, in large part, to more and more creative financing options for homeowners who want to generate their own electricity, according to a report from GTM Research.

The solar industry surged in 2012 and 2013 thanks to the new third-party ownership model that allowed homeowners to install solar with no or very little money out of pocket. Companies like SolarCity and Sunrun spurred that sector of industry growth. In 2014, that model is still dominating the solar scene with 72 percent of all new rooftop solar projects in stalled in 2014 being third-party owned.

But GTM predicts that direct ownership will surpass third-party systems by 2020.

The evolution toward direct ownership seems natural and logical in context.

Early in the solar industry’s growth, there were not easy ways – during the credit crunch that followed the recession – to finance residential rooftop solar installations for those who wanted to own the panels but didn’t have the cash. Lenders and institutions were timid about sending dollars out into the world in such a volatile economy. And the industry and technology were relatively new and unproven.

Fast-forward three years and solar is no longer a fringe environmental movement or an experiment. It’s the fastest-growing and dominant new energy source, not just in the US, but across the globe. With the technology and the demand proven, the only remaining question marks are policy impacts and financing.

Solar industry experts argue that solar will reach grid parity with other power generation methods within the next decade. Costs keep falling and the technology keeps improving. So, even if subsidies disappear, there is strong evidence solar will remain cost-competitive.

While solar policy decisions will certainly impact solar adoption rates, there’s no question that financing will become more available (barring some economic calamity that freezes credit). And that could counteract negative policy decisions.

Companies that built their businesses on third-party solar ownership are pivoting to keep up with the changing market. SolarCity, for example, has several loan options to help homeowners install solar. Traditional lending institutions, such as Admiral’s Bank, are rolling out solar loan products.

It’s already just about as easy to finance a rooftop solar installation as it is to buy a new car on credit. But the challenge for solar companies and lenders will be explaining new options to the public.

Utility-scale solar power generation is now substantially more efficient in terms of the amount of land it uses for electricity generation than a decade ago. END_OF_DOCUMENT_TOKEN_TO_BE_REPLACED

END_OF_DOCUMENT_TOKEN_TO_BE_REPLACED

END_OF_DOCUMENT_TOKEN_TO_BE_REPLACED
Calculate How Much You Can Save By Going Solar!
Use The Web's Best Solar Calculator!