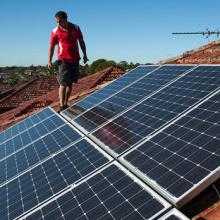 Solar power surpassed 20 gigawatts of installed capacity in the United States during the second quarter of 2015 – thanks, in large part, too residential rooftop solar installations.

And that capacity could almost double again in the next year, according to a recently released report from the Solar Energy Industries Association. SEIA projects an additional 18 gigawatts of solar will be installed by the end of 2016. A huge portion of that will be small rooftop solar projects. 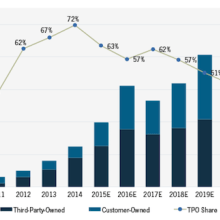 For the first time ever, residential rooftop solar installations outpaced non-residential solar in the US in 2014. That’s thanks, in large part, to more and more creative financing options for homeowners who want to generate their own electricity, according to a report from GTM Research.

After the Georgia legislature unanimously passed a bill Friday to allow third-party financing for rooftop solar installation, advocates expect the state to see massive solar industry growth in the state.

The bill still has to be signed by the governor and media has reported that governor’s stance on House Bill 57 is unknown. But a unanimous vote in any legislative body is pretty impressive these days.

Tags
Georgia
third-party financing
solar leasing
Sunrun
How Much Money
Can You Save
With Solar Energy?
Calculate Your Savings Now