NY Gov. Cuomo calls for quadrupling amount of solar in the state 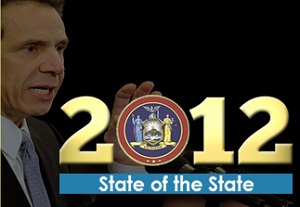 New Gov. Andrew Cuomo (D) made solar a priority in his “State of the State Address” on Jan. 4.

“In its first year, the NY-Sun Initiative will be capable of doubling the customer-sited photovoltaic capacity that was installed in 2011. By 2013, we estimate that NY-Sun will quadruple the 2011 capacity,” Cuomo said during the speech.

The move drew praise from solar advocates in the state, who remain steadfast in their resolve to push the short-term goals but continue to look long-term.

“It’s great that he’s focusing in on it and making it a priority as promised in his campaign. It’s putting us on [the right] trajectory,” said New York Solar Energy Industries Association (NYSEIA) President Ron Kamen. “This is a great step that he’s taking and showing leadership.”

Cuomo proposed achieving the expansion of solar in the near term through executive order rather than legislation. That could take some time and not produce results. After all, legislation introduced last year that would have created a solar carve-out was introduced, but failed to win passage, Platt’s reported.

“I think [Cuomo] got the political will to do what’s he’s laid out, and he’s going to expand solar significantly. He’s pretty popular. He’s come in and shown real leadership, which New York has lacked for a long time,” Kamen said. “The good part is, he’s respected by people on both sides of the aisle and is getting things done.”

That’s not to say NYSEIA is ready to rest on the work Cuomo’s doing.

“This is just a 3-year plan, a short-term plan. While it’s great, it’s not the overall state goal that we’re going to work toward,” Kamen said.

Under the Cuomo’s direction the state will install about 350 megawatts of solar over the next three years.

“That by itself is significant and measurable,” said Kamen.

NYSEIA’s goal is to see 5 gigawatts of solar installed throughout New York.

“What we don’t want to see is to have the legislature decide the Governor’s doing enough,” Kamen said.

The organization will continue to build its coalition and support further efforts to grow solar in the state.

Utility-scale solar power generation is now substantially more efficient in terms of the amount of land it uses for electricity generation than a decade ago. END_OF_DOCUMENT_TOKEN_TO_BE_REPLACED

END_OF_DOCUMENT_TOKEN_TO_BE_REPLACED

END_OF_DOCUMENT_TOKEN_TO_BE_REPLACED
Calculate How Much You Can Save By Going Solar!
Use The Web's Best Solar Calculator!