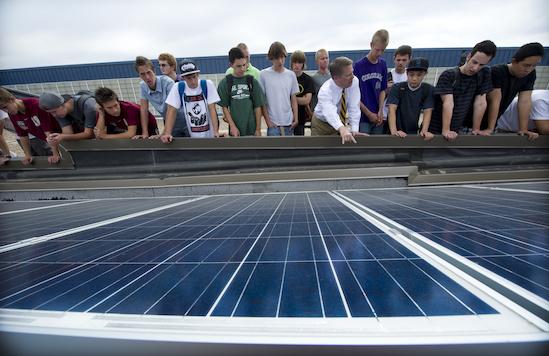 Last month, the Natural Resources Defense Council (NRDC) embraced the popularity of crowdfunding by kicking off its own crowdfunding campaign. The goal of the organization's new campaign, the Solar Schools Initiative,  is to fund solar projects at schools. It has been coined a resounding success. Within a month of launching, the campaign has already out raised its $54,000 expectations.

The NRDC said it exceeded its goal by Nov. 14. “We received funding from nearly 300 supporters all over the country, with contributions ranging from $1 to $15,000,” said NRDC Executive Director Peter Lehner. “We received nominations for 79 school districts as possible locations for our pilot, demonstrating that people around the country see solar power as a solution to help shore up school finances, provide educational opportunities for our kids, clear the air and bring in good, local jobs for communities.”

“With our crowd-funding campaign completed successfully, we can now move forward to develop the first Solar Schools pilot project, which will be launching in North Carolina in early 2014,” Lehner added. “In the coming weeks, our Solar Schools team will be working with local partners and communities there to select the first wave of schools.”

The NRDC has been actively advocating solar for years and has developed, among other things, a guide to help stadiums to go solar, which more professional sports teams are now doing. NRDC launched its crowdfunding campaign on Indiegogo, which has helped thousands of projects get underway, from films to music albums. On NRDC’s Indiegogo page, the organization said it plans to launch the project at three to five arrays as early as January 2014 and to roll out the beta to qualifying communities 6 to 12 weeks later.

“Our vision is to tap into the enthusiasm that parents and students have for solar power, and connect them to the experts and resources that will help them make their vision a reality, and empower them to create the communities they want,” Lehner stated.

The NRDC will provide training and ongoing support, in addition to the online platform, for the early phase participants. “Throughout this phase, we will be testing and refining our organizer training and tools. With your help, we can develop the country's most effective platform for bringing clean solar energy to our classrooms...and equally as important, spark the interest of many young minds in science, technology, engineering and math,” a spokesperson for the project said.

After decades of research, the solar industry has finally started to develope the underlying technology behind “transparent” solar panels. END_OF_DOCUMENT_TOKEN_TO_BE_REPLACED

Sustainable energy sources are rapidly soaring in popularity in different parts of the world. The world's dependence on renewable power sources will significantly increase in the foreseeable future. END_OF_DOCUMENT_TOKEN_TO_BE_REPLACED

Being able to charge your EV with a solar panel roof while you are driving is no longer a fancy dream. END_OF_DOCUMENT_TOKEN_TO_BE_REPLACED
Calculate How Much You Can Save By Going Solar!
Use The Web's Best Solar Calculator!