Military Installing Solar on Base Housing 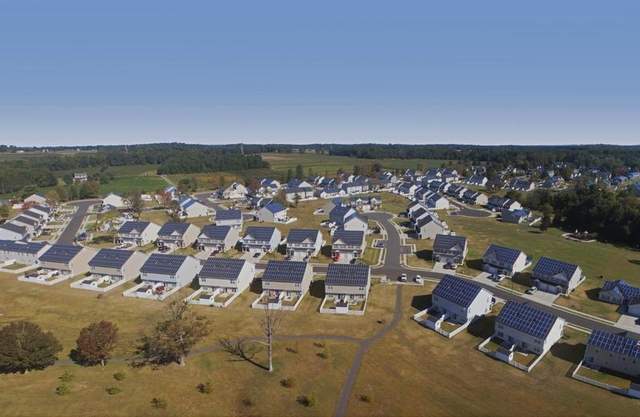 A massive 55,000-panel residential solar project at Joint Base McGuire-Dix-Lakehurst near Trenton, New Jersey might be the first of its kind to date, but it’s certainly not the only redressing of military housing in solar panels.

What makes the New Jersey installation different is the way it was financed and organized.

Base leaders cut the ribbon on the new solar project that covered 1,500 of the 2,200 base houses in solar panels last week. The rooftop solar arrays will generate about 30 percent of the power each house needs and save the military men and women living in them a total of $1.3 million a year, according to a release about the project.

The New Jersey solar installations were creatively financed using a combination of private financing from military housing developer United Communities, traditional loans from CIT and more than $3 million in crowdfunding from Mosaic, which allows regular people to invest directly in solar projects with as little as $25.

The financing model separates this project from several similar projects underway at other military bases throughout the country, as well as abroad. Because the systems were financed, the military housing developer ultimately owns the projects.

Other bases are primarily working with SolarCity, a third-party solar service provider that owns the rooftop panels and sells the power they generate to the people living in the host homes at a discount – also known as solar leasing or power purchase agreements.

SolarCity’s SolarStrong initiative is going strong. In fact, the company has made several announcements recently about new bases where the company will install rooftop solar arrays on military housing.  SolarCity leaders say through the SolarStrong initiative, they expect to install more than 300 megawatts of solar on 120,000 military homes and housing units over the next few years.

The company has already installed 13.2 megawatts of solar on 4,700 homes at Balfour Beatty-managed residential communities in Fort Bliss and the White Sands Missile Range in Texas. It’s also installing 3.4 megawatts of solar on 600 homes located at New Mexico’s Holloman Air Force Base, 24 megawatts on 6,500 residences at the Ohana Military Communities in Hawaii and several other projects on military bases in Los Angelas, Colorado Springs and in Arizona.

“The children who grow up in these neighborhoods will have a glimpse of the future before any of us — neighborhoods in which the majority of roofs have solar panels on them,” Aaron Gillmore, SolarCity’s vice president of solar development, said in a statement. “It’s the foresight and strategic know-how of the Department of Defense that is making this future a reality today.”

Utility-scale solar power generation is now substantially more efficient in terms of the amount of land it uses for electricity generation than a decade ago. END_OF_DOCUMENT_TOKEN_TO_BE_REPLACED

END_OF_DOCUMENT_TOKEN_TO_BE_REPLACED

END_OF_DOCUMENT_TOKEN_TO_BE_REPLACED
Calculate How Much You Can Save By Going Solar!
Use The Web's Best Solar Calculator!