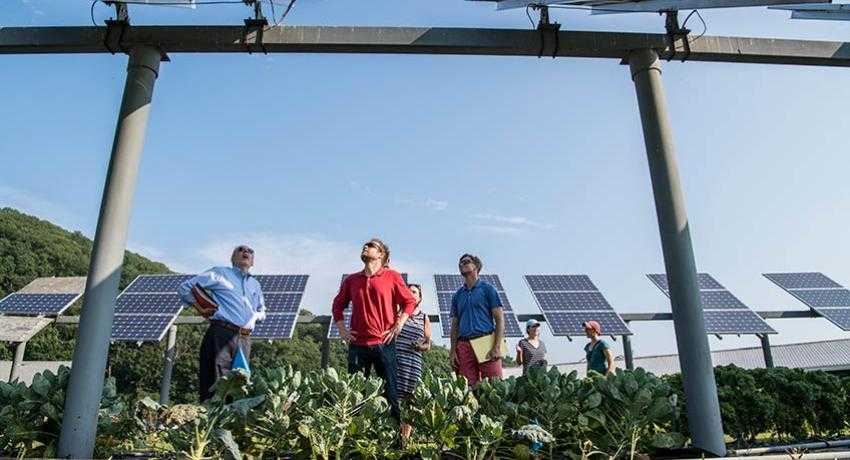 With global warming decidedly changing the climatic conditions across the US, crop production has been steadily declining across the country for both small and large farms. In fact, an increasing number of smaller farms (less than 100 acres) are finding it difficult to sustain profits from mere farming, and are hence looking towards innovative measures to make profit and live off the land.

This is where the “Jack Solar Garden” project by Byron Kominek – a determined farmer from Colorado – seems to be on the verge of a path-breaking solution. Here are the highlights.

A critical foray into agrivoltaics

This can be considered as a strategic merger between the agricultural and solar (photovoltaic) industries. Kominek’s farm land spreads across 24 acres under the hot Colorado sun. He thus came up with the idea of building a solar farm on this land, with the potential to make money by selling clean energy to the grid.

However, many countries – including the US – have stringent laws that reserve agricultural land for farming. The result was a clever compromise where Kominek plans to install an array of solar panels on a part of his farm, placed 6-8 feet above strategically cultivated crops.

With this, the “Jack Solar Garden” expects to have:

The panels will also be surrounded by a perimeter of beehive boxes and land cultivated for pasture. This retains the essential “agro” attribute of the farmland.

Further, Kominek has signed up with Colorado’s Xcel Energy to sell clean energy produced on his solar farm to the grid. In fact, he has taken this a step further to organize it as community energy/farming project, with neighbors investing in solar panels to get credits on their utility bills.

But of course, the fresh vegetable boxes they get from the (community) farm are a nice bonus! All this helps to offset the initial costs involved in creating a new solar farm.

Not surprisingly, agrivoltaics has been practiced for years in land-strapped Japan. The results have been promising, with some farmers reporting doubled production on cherry tomatoes and tripled production on red chitepin peppers when grown under solar panels.

As is the case with all niche adventures, this project will also need to overcome several challenges to thrive in the long term. These include:

But with time, Kominek’s foray into solar farming may well be the breakthrough the cash-strapped farmers need, to turn in much-required profitability from their land. As one American statesman loves to remind us, “The future of solar is bright.” Indeed!

Utility-scale solar power generation is now substantially more efficient in terms of the amount of land it uses for electricity generation than a decade ago. END_OF_DOCUMENT_TOKEN_TO_BE_REPLACED

END_OF_DOCUMENT_TOKEN_TO_BE_REPLACED

END_OF_DOCUMENT_TOKEN_TO_BE_REPLACED
Calculate How Much You Can Save By Going Solar!
Use The Web's Best Solar Calculator!