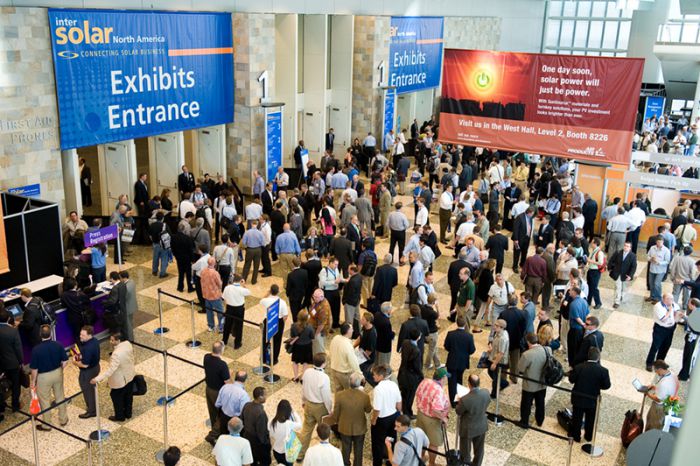 The event traditionally draws bigger crowds than any other solar industry conference, according to a release from the organizers. And this year’s event is expected to stand out as one of the biggest yet.

With more than 200 speakers and 50 event sessions, the conference is a gold mine for information about the solar industry and how it’s evolving.

After kicking off with a speech from California Governor Edmund Brown, the conference will tackle issues from solar financing to the necessity for energy and grid storage development.

The U.S. solar industry grew 71 percent between 2011 and 2012, according to a release from event organizers. Innovation in technology, financing and aesthetics enabled those tremendous increases.

Along with celebrating finalists for their innovation, more than 800 exhibitors will be sharing their cutting-edge new technologies with conference attendees and visitors.

“Intersolar North America allows attendees to take what they see on the show floor and build real world projects that integrate these advancements,” Markus Elsässer, CEO of Solar Promotion International and one of the event organizers, said in a statement. “We’re excited to provide solar integrators and installers with the first look at new technologies that are expanding the market for solar.”

Conference sessions will include a panel discussion with solar company CEOs about the future of the industry and how it’s evolving along with numerous other discussions hinging on everything from the business of solar to innovative technologies, the role of government incentives and the potential issues with utility companies.

Among business issues surrounding the solar industry few are more significant than that of financing.

“A promising financing trend in distributed solar generation has been the growth of third party owned solar, or solar as a service, where solar energy systems are owned by the project developer and the generated electricity is sold back to homeowners, business and non-profit owners at a price lower than utility rates,” according to a release about the conference.

While the model isn’t new, it is gaining momentum with more than a dozen states allowing third-party owned systems. Sunrun and SolarCIty, two of the leading solar leasing companies, will present on their models.

Other experts will discuss changes in the market and incentives and how sustainable the industry’s impressively rapid growth rate might be.

The conference and exhibits will go through Thursday, July 11.

END_OF_DOCUMENT_TOKEN_TO_BE_REPLACED

Researchers at the Northeastern Center for Renewable Energy Technology (NUCRET) are exploring trees as a natural resource to create new sustainable materials. END_OF_DOCUMENT_TOKEN_TO_BE_REPLACED

As of January 1st, 2020 home owners could claim 30% of the installation cost as deductions while filing their taxes, this has changed significantly this year. END_OF_DOCUMENT_TOKEN_TO_BE_REPLACED
Calculate How Much You Can Save By Going Solar!
Use The Web's Best Solar Calculator!