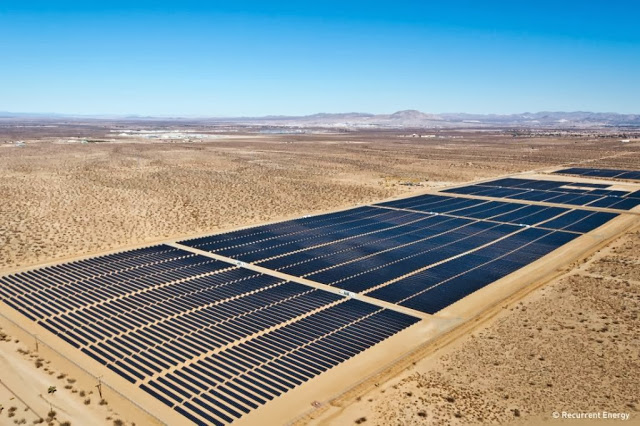 Google might help the world search for just about—well, everything, but when the search and mobile giant is looking for investments, it’s increasingly turning to solar. On Nov. 14, Google joined forces with KKR and Recurrent Energy, investing in six more solar photovoltaic (PV) facilities that are being developed by Recurrent Energy. In all, the companies are investing in about 106 megawatts of new solar power.

“You’d think the thrill might wear off this whole renewable energy investing thing after a while,” wrote Google’s Kojo Ako-Asare, Head of Corporate Finance, on the company’s official blog. “Nope—we’re still as into it as ever, which is why we’re so pleased to announce our 14th investment: we’re partnering with global investment firm KKR to invest in six utility-scale solar facilities in California and Arizona.” He aded that Google’s investment in the arrays is about $80 million.

“This investment is similar to one we made back in 2011, when we teamed up with KKR and invested $94 million in four solar facilities developed by Recurrent,” Ako-Asare added.  For the former investment, KKR created its SunTap venture to invest in U.S. solar projects. That investment financed four projects totalling 88 megawatts of projects under power-purchase agreements (PPAs) with the Sacramento Municipal Utility District (SMUD).

This new round of funding will support five projects in California and one in Arizona, all of which are slated to come online in January 2014. The projects will provide power to three offtakers, including Southern California Edison, under long-term PPAs. Google and KKR are providing equity and debt financing for the projects.

“This partnership is ultimately about growing our clean energy resources in North America,” stated Ravi Gupta, a senior member of KKR’s Infrastructure Team. “As states like California and Arizona adopt high standards for the use of renewable energy, we believe private capital partners can play an important role in helping them meet those goals.” This is the company’s fifth renewable energy investment.

It’s Google’s 14th investment in renewable energy. The internet giant has already invested more than $1 billion in such projects, including funds that support residential solar through third-party ownership.

“These investments are all part of our drive toward a clean energy future,” said Ako-Asare. “By continuing to invest in renewable energy projects, purchasing clean energy for our operations and working with our utility partners to create new options for ourselves and for other companies interest in buying renewable energy, we’re working hard to make that future a reality.”

Arno Harris, CEO of Recurrent Energy, praised both companies.  “Google and KKR’s continued partnership with Recurrent Energy showcases their strong commitment to a clean energy future.  Their leadership in clean energy investment further validates solar as an integral part of our energy economy.”

Utility-scale solar power generation is now substantially more efficient in terms of the amount of land it uses for electricity generation than a decade ago. END_OF_DOCUMENT_TOKEN_TO_BE_REPLACED

END_OF_DOCUMENT_TOKEN_TO_BE_REPLACED

END_OF_DOCUMENT_TOKEN_TO_BE_REPLACED
Calculate How Much You Can Save By Going Solar!
Use The Web's Best Solar Calculator!