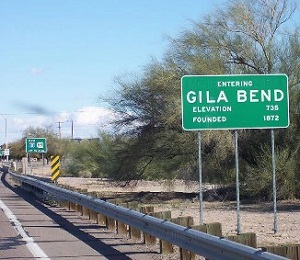 In its hay day, Gila Bend (pronounced Hila) was home to about 10,000 people. But when an Air Force auxiliary field went private and a popular recreational reservoir became contaminated with pesticides, the town shrank.

That’s probably going to change dramatically in the next year or two, said Eric Fitzer, the town’s planning and economic development director. The town has come up with a brilliant growth model. And solar power is the key.

“The amount of sunlight we receive here is ridiculous,” Fitzer said. “There are only like 10 to 15 days a year where we don’t get sunlight.”

One of the country’s biggest solar plants, the Abengoa solar project, will be located just outside the city limits. And contracts were signed this week on another 18-megawatt photovoltaic solar panel farm in the city’s new solar power overlay.

“We definitely produce more energy than we use,” Fitzer said. “Definitely.”

The new 18-megawatt project, being built by SOLON Corporation, for Arizona Public Service to operate, only took three months to make it through the approval process and will likely be finished and online by the end of 2011, Fitzer said.

“We decided to fast-track the process,” he said. “We have sun here. It’s not rocket science. This area is perfect for solar. Why make it difficult?”

Projects typically take three years or more to go through the approval process. Not in Gila Bend.

There’s unused agricultural land on the outskirts of the city that the town has included in this solar overlay for fast track approval. Fitzer has about eight applications for other big projects on his desk now and gets two to three phone calls every day from companies interested in taking advantage of the town’s speedy approval process.

He’s totaled up the amount of power that would be generated by the projects he’s received proposals for. It’s 1.1 gigawatts, enough energy to power about 626,000 homes.

Fitzer said he expects these solar projects to create a much desired economic boom in the town. The Abengoa project will bring about 400 jobs, followed by another 600 from the SOLON project. Once the jobs come, the people will and then the town will need new housing developments, Fitzer said.

He believes the growth can be sustained. The fast-track process should allow workers to move on to the next solar project as soon as the last one was completed.

Utility-scale solar power generation is now substantially more efficient in terms of the amount of land it uses for electricity generation than a decade ago. END_OF_DOCUMENT_TOKEN_TO_BE_REPLACED

END_OF_DOCUMENT_TOKEN_TO_BE_REPLACED

END_OF_DOCUMENT_TOKEN_TO_BE_REPLACED
Calculate How Much You Can Save By Going Solar!
Use The Web's Best Solar Calculator!