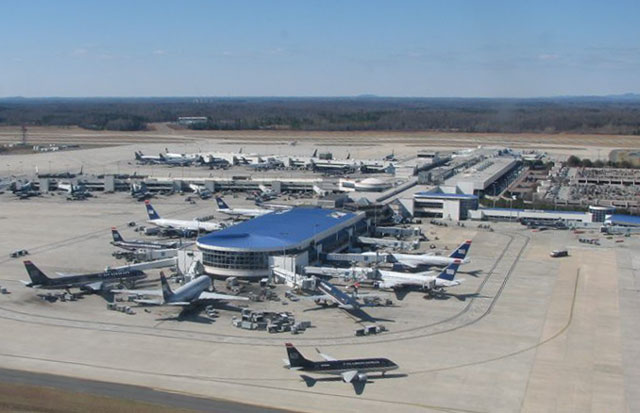 The Charlotte Douglas International Airport aims to join dozens of other airports around the country in a trend toward decorating with solar panels.

The North Carolina airport issued a request for proposals this week asking companies to pitch a massive airport solar array that could be the largest in the state and would likely beat out Indianapolis International Airport for the largest airport solar installation in the country.

Charlotte Douglas had a small pilot project for solar, but hadn’t previously committed to such a large-scale investment in the technology.

“This is potentially going to bring us into a whole new ballpark,” Robert Phocas, Charlotte’s Energy and Sustainability Manager told the Charlotte Observer.

The airport is offering up 128 acres, which includes building rooftops and spaces between runways, as well as parking lots and structures. If the space were completely built out to its maximum density with solar panels, it could potentially produce 53 megawatts of solar electricity. Of course, natural limitations in space, connectivity and logistics will likely result in a much lower total.

Even if the total size of the solar array is half its potential, it could still be more than twice the size of the 12.5-megawatt solar installation at Indianapolis International Airport, which is currently believed to be the largest located at an airport.

Charlotte Douglas joins a long list of airports that have ventured into solar investments.

Airports have struggled to make their operations more environmentally sustainable as thousands of jets take off from and land on their airstrips every month and hundreds of thousands of vehicles drive long distances to park in their parking lots. The carbon footprint of flying and the airline industry is massive.

To offset some of their environmental impacts and to reduce expenses for airports, which are typically managed by the cities they occupy, administrators have become creative.

In states where the incentives are good and utilities are willing to negotiate, solar is a perfect fit for the enterprises, which often have huge swaths of undeveloped land not suited to other types of development.

Charlotte’s RFP is open with room for developers to be creative – something they requested, Phocas added.

Utility-scale solar power generation is now substantially more efficient in terms of the amount of land it uses for electricity generation than a decade ago. END_OF_DOCUMENT_TOKEN_TO_BE_REPLACED

END_OF_DOCUMENT_TOKEN_TO_BE_REPLACED

END_OF_DOCUMENT_TOKEN_TO_BE_REPLACED
Calculate How Much You Can Save By Going Solar!
Use The Web's Best Solar Calculator!