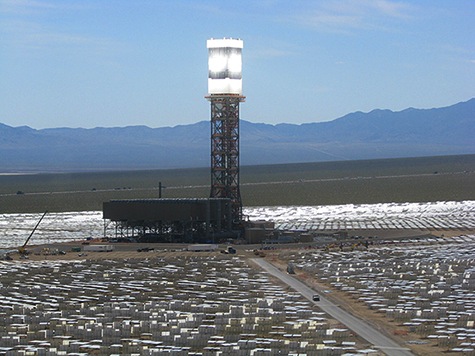 The project has faced many obstacles including a newly discovered Ice Age fossil bed. However, the project also faced steep criticism from the Native American community, even partly inspiring a documentary, “Who Are My People?”, that dealt with how many large-scale solar projects were approved by the Bureau of Land Management and others, despite outcry from the Native American community, chief among them the Chemehuevi, Quechan nations and by the La Cuna de Aztlan Sacred Sites Protection Circle, which filed lawsuits against numerous solar projects on the basis that they disturbed scared lands and hieroglyphs and geoglyphs.

The project was approved in October, even then there were signs of it being in some trouble, according to ReWire, a renewable energy blog at California public radio station KCET. “CPUC made pointed remarks about the cost of the project's power saying in a draft resolution that the agreements ‘compare poorly on price and value relative to other solar thermal projects offered to SCE.’,” according to the site.

Rio Mesa is the latest concentrating solar power (CSP) using thermal concentration to fall victim to the steeply falling prices of photovoltaics and other environmental factors like flora and fauna concerns. Unlike PV projects, the CSP project must reach larger sizes to produce electric cost-effectively, so while a PV project as small as 50 megawatts or even 10 megawatts can produce electricity at increasingly cost-competitive rates, a CSP project generally must be of the 100 megawatt scale or larger to make economic sense.

Still, BrightSource’s first project, the Ivanpah SEGS being built by Bechtel for BrightSource, is nearly complete and should come completely online by the end of 2013. The company also is moving forward on other projects. For instance, in March, it announced that it partnered with Abengoa to build the 500 megawatt Palen SEGS. That project, however, is proposed for a Department of Interior Solar Energy Zone, which was pre-screened for issues BrightSource faced at Rio Mesa.

Utility-scale solar power generation is now substantially more efficient in terms of the amount of land it uses for electricity generation than a decade ago. END_OF_DOCUMENT_TOKEN_TO_BE_REPLACED

END_OF_DOCUMENT_TOKEN_TO_BE_REPLACED

END_OF_DOCUMENT_TOKEN_TO_BE_REPLACED
Calculate How Much You Can Save By Going Solar!
Use The Web's Best Solar Calculator!