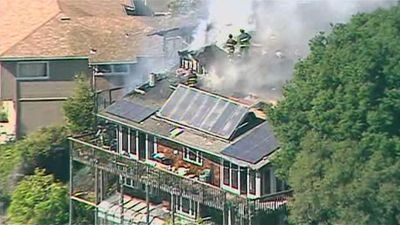 Rooftop solar installations have come under scrutiny recently from groups saying that they can hinder effective firefighting efforts, which can be a major safety concern for home and business owners thinking about installing solar.

While the concern is a valid one, not many are flat-out accusing solar panels of starting fires.  In fact, there are several safety measures built into most rooftop solar arrays that are designed to prevent them from hindering firefighting efforts.

Firefighters weren’t able to access the roof of the building because the solar panels would be activated via the shine from artificial light, which posed an electrocution threat, according to the September article.

That inability to access the roof prevented firefighters from putting holes in it to vent combustible gases and all but eliminated one strategic fire access point.

Not all rooftop solar arrays are designed identically or wired together in the same way, however.

While nearly all grid-tied solar arrays are designed to stop producing electricity once they can no longer feed into the grid, which prevents risk to electrical workers, some can remain active and pose an electrical threat to someone trampsing around on the roof with a metal axe.

Most residential rooftop solar systems are relatively small, often consisting of no more than a couple dozen solar panels, often times wired together in groups of three or seven. The individual inverters can be shut off, deactivating the panels.

Solar industry leaders have said one issue with the New Jersey fire was that it was a large system with long strings of panels wired together to create high voltage.

While typical small solar arrays are unlikely to have similar issues to the system on the New Jersey warehouse, some solar manufacturers are finding a new way to differentiate themselves in the face of this newfound fear over fire safety.

For example, tenKSolar is advertising a low voltage solar panel that it says operates more efficiently, will last longer and will be safer than standard solar modules. The manufacturer has a lot of selling points for its new solar module, but has been able to focus on its safety since the fire concerns arose.

“The 100 percent safe low voltage solar system by tenKsolar will not generate electrical arcs, always operates at a low voltage, and powers off at the module level in an emergency,” according to a press release from the company.  "It enabled emergency personnel to effectively do their job without the concerns associated with high voltage conventional PV systems.”

The Minnesota-based manufacturer could be at the leading edge of a new marketing trend for the solar industry.

Utility-scale solar power generation is now substantially more efficient in terms of the amount of land it uses for electricity generation than a decade ago. END_OF_DOCUMENT_TOKEN_TO_BE_REPLACED

END_OF_DOCUMENT_TOKEN_TO_BE_REPLACED

END_OF_DOCUMENT_TOKEN_TO_BE_REPLACED
Calculate How Much You Can Save By Going Solar!
Use The Web's Best Solar Calculator!