43 Gigawatts of Solar in the Pipeline 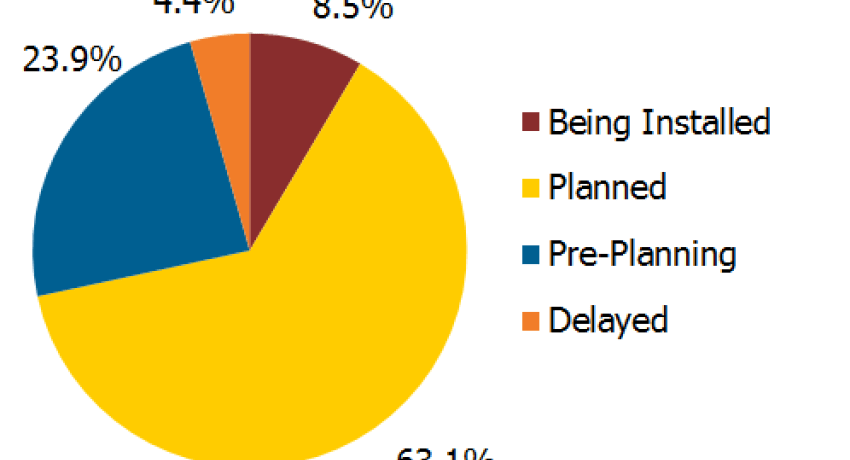 There are enough solar photovoltaic installations in the pipeline to power 6 million households.

NPD Solarbuzz, an industry research and analytics firm, found that U.S. solar developers have more than 43 gigawatts of projects in varying stages of planning and construction on the board.

While many of the projects won’t be completed, many will and they will help to drive down solar costs as they are installed, making solar increasingly cost competitive with fossil fuels.

“The increase in new solar PV projects being planned or under construction is driving double-digit annual growth forecasts for PV adoption within the United States,” said Michael Barker, Senior Analyst at NPD Solarbuzz.

Since the solar industry started to shine around 2007, it has been dominated by large utility-scale projects designed to help investor-owned utility companies meet state renewable energy portfolio standards.

That’s starting to change now, according NPD. There are several reasons for the shift to smaller projects.

In order for projects to qualify for the 30 percent the U.S. Investment Tax Credit, projects have to be “under construction” before the incentive is reduced in 2017. Massive 100- to 200-megawatt utility-scale solar projects can take years to be permitted and started. To combat this, developers have been gearing down to smaller 20- and 30-megawatt projects.

“With just three years remaining until the full tax credit incentive rate declines, solar PV project developers in the United States are now planning to complete projects, or have a significant portion under construction, prior to the 2017 deadline,” added NPD Analyst Christine Beadle. “This deadline is causing a shift in focus to smaller projects that can be completed on shorter timescales.”

But big solar developers turning to small projects aren’t the only reason small is the ticket to big growth in the U.S. solar industry, according to the NPD report.

Residential rooftop solar arrays and small solar installations for businesses are starting to dominate the market, especially with the introduction of creative financing models like leasing and third-party agreements companies such as Sunrun, SolarCity and others are offering clients.

The growing solar industry will make the U.S. the third biggest solar market in the world behind China and Japan. The U.S. is poised to outshine the solar pioneers in Europe by 2014.

Approval is expected soon on Gemini, a huge 7,000+ acre solar farm served by Warren Buffet’s NV Energy, thus making it the largest solar farm in all of America. END_OF_DOCUMENT_TOKEN_TO_BE_REPLACED

END_OF_DOCUMENT_TOKEN_TO_BE_REPLACED

END_OF_DOCUMENT_TOKEN_TO_BE_REPLACED
Calculate How Much You Can Save By Going Solar!
Use The Web's Best Solar Calculator!