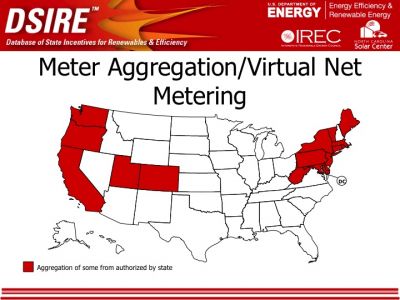 Almost every state in the country has net metering laws on the books.

But only a few states allow a lesser-known policy that is critical for the expansion of distributed renewables, particularly community-scale solar— that’s aggregate, virtual, or group net metering.  And there are a lot of good reasons to want to see its expansion.

The basic premise is that the output of a renewable system can be shared among accounts.  An extension of this policy is allowing multiple electric customers to share in a net metered system’s output.  This is often referred to as “community net metering,” “aggregated net metering,” “virtual net metering,” or “group net metering.”

However, whatever you want to call the policy, looking at the small number of states that permit such net metering reveals a myriad of unnecessary exclusions and caveats which limit their effectiveness—and the amount of net metered solar.

For example, New Jersey’s policy adopted this month is restricted only to public projects.  Pennsylvania’s version is called “aggregate virtual net metering” and is limited to individual customers who own multiple meters within a two mile radius.  California allows for sharing of credits for multi-tenant properties and also for local governments, but only if all participating accounts receive a time-of-use rate.

But for something shared so virtually as an electron, one needs to ask why these policies include so many unnecessarily restrictive caveats based on things like geographic distance and customer class.

It’s Vermont that has the most advanced and solar-conducive policy.  Started first with the concept of allowing multiple farm buildings to join a “group” for on-site generation, Vermont’s expanded “group net metering” law allows offsite generation up to 500kW (2.2MW for military). The only requirement is that members be in the same electric utility.  That’s it.  Groups may be mixed among residential, commercial, and government customers.  Local utilities must reward credits and bill net metering customers within a group directly.  And, notably, Vermont’s law recently provided time-of-use customers a consistent method for crediting their net metered production.  The system has proven efficient, easy, and most importantly encourages net metering.

Why is getting this policy right so important?  The expansion of policies like group net metering help dissolve the traditional boundaries of distributed electric generation and are critical for facilitating the expansion of solar net metering.

Achieving economies of scale: While traditional net metered solar often makes a lot of financial sense, group net metering laws allow for economies of scale in larger project development.  According to the Department of Energy, the average residential cost of solar is approximately $6/watt nationally.  Meanwhile, larger scale distributed solar projects cost $3/watt (for fixed solar) or even below.  Consider also that land values vary dramatically even within the same electric utilities, and you see how installing a site a little way down the road can also have a significant impact on financials of a project.

Reduced default risk:  For states that allow third party or Power Purchase Agreement (PPA) investors to offer group net metering, these policies reduce the risk to an investor because should a net metering customer suddenly not have an electric load (a school closes, for example) or not be able to pay (in the case of a bankruptcy), the PPA agreement could be fashioned so that the energy output from the project could simply be transferred to a new customer within the utility if allowed under group net metering law. 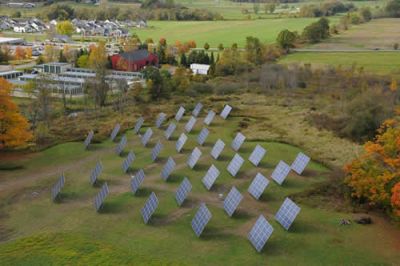 In sum, aggregate, virtual, and group net metering polices allow for the expansion more efficient, economical projects to provide renewable energy to an increasingly diverse customer.  It key, though, to get the policies right.

State policies and individual utilities should look hard at how to dissolve the traditional, unnecessary boundaries in the industry. Such a policy shift could quickly usher in a brighter distributed renewable energy future.

Andrew Savage is on the executive management team of AllEarth Renewables and is former deputy chief of staff to Congressman Peter Welch.

Utility-scale solar power generation is now substantially more efficient in terms of the amount of land it uses for electricity generation than a decade ago. END_OF_DOCUMENT_TOKEN_TO_BE_REPLACED

END_OF_DOCUMENT_TOKEN_TO_BE_REPLACED

END_OF_DOCUMENT_TOKEN_TO_BE_REPLACED
Calculate How Much You Can Save By Going Solar!
Use The Web's Best Solar Calculator!