Alex, the little Wave Glider that could (track hurricanes) 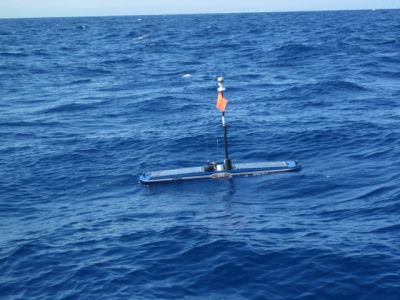 Liquid Robotics, Inc.’s (LRI’s) solar and wave-powered Wave Gliders have taken on remote operations in the ocean for a while now, but now one of them, Alex, is taking on its biggest challenge yet, hurricane season.

Alex was launched off the shores of Puerto Rico a few weeks ago as hurricane season got underway. “Alex is owned and operated by Liquid Robotics.  Dr. Edward Lu, Chief of Innovative Applications, is funding this project as part of his overall work to explore new applications for ocean science. He is working in concert with U.S. National Oceanographic and Atmospheric Administration’s (NOAA’s) Atlantic Oceanographic and Meteorological Laboratory (AOML), said Liquid Robotics Federal, LLC’s Director of Program Development Dr. Kyle Vanderlugt.

Alex’s mission, to record data on hurricanes in a way that’s never been done before, from the eye of the storm in the ocean. The unit is outfitted with sensors to measure water temperature, wave height, direction and more, wind and barometric pressure. It’s also capable of measuring ocean temperature to a depth of 7 meters.

The Wave Glider is designed to stay upright even in the face of significant waves  like those the could be experienced during a hurricane. “A surface float is connected via a 7 meter umbilical cord to a subsurface wing system,” Vanderlugt. “The weight of the sub-surface wing system ensures that the surface float is maintained in an upright position. In addition, in the largest of waves, the weight of the sub-surface system pulls the surface float beneath a cresting wave much like a surfer would push a surfboard under a wave--called duck diving,” he said.

The unit is customizable from afar as needed, Vanderlugt said. “Alex is designed to be either pre-programmed for sampling protocols or it can be programmed in real time,” he said. “This allows LRI to control the frequency of collecting atmosphere and oceanic readings. Sampling can be done almost perpetually or at time intervals of hourly or even greater. An example of the intervals for this hurricane project is approximately 5-15 minutes which depends on location of Wave Glider to the hurricane.”

The data LRI’s robots are collecting will be invaluable to NOAA and can be used by AOML and PMEL to better understand how carbon and hurricanes impact the oceans. The work with AOML could someday be used to help with hurricane prediction or movement prediction.

Utility-scale solar power generation is now substantially more efficient in terms of the amount of land it uses for electricity generation than a decade ago. END_OF_DOCUMENT_TOKEN_TO_BE_REPLACED

END_OF_DOCUMENT_TOKEN_TO_BE_REPLACED

END_OF_DOCUMENT_TOKEN_TO_BE_REPLACED
Calculate How Much You Can Save By Going Solar!
Use The Web's Best Solar Calculator!