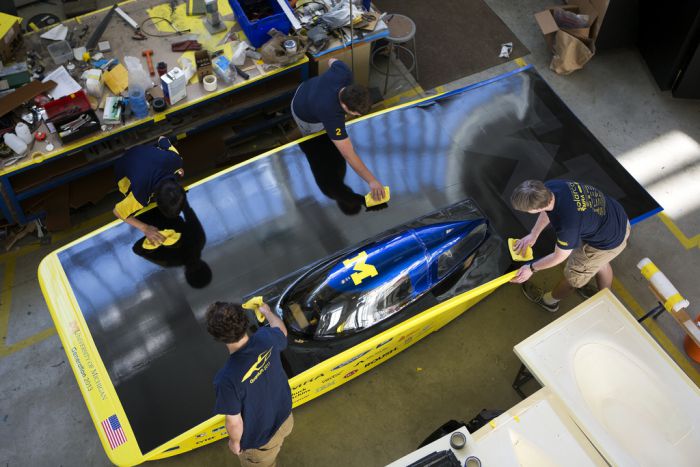 It looks like something from the distant future, long and flat, except for the bubble popping out with the Michigan “M.”

It is called “Generation” a car designed by the University of Michigan for the World Solar Challenge, an 1,800-mile, week-long race across Australia.

The bold, strange new shape is meant to comply with new rules that require four wheels instead of three, while still maintaining maximum efficiency.

The change meant the students had to start their design from scratch, said Eric Hausman, project manager with the UM Solar car. It was the biggest shift in rules since 2007 when the driver moved from lying down to seated.

The UM team evaluated several designs starting in June 2012 when they learned of the rule change and settled on something asymmetrical by February 2013 when they began construction. The students worked with the driver’s seat, nicknamed the “butt bucket” by the team. In the old three-wheeled cars, the butt bucket was situated directly behind the front wheel, encased in the same fairing. Under the new rules, the wheels can’t be directly next to each so if the team arranged them like in a regular car, the bucket would hang down below the surface reducing efficiency. Instead the driver and two wheels are in one giant fairing on the left side of the car and on the right side there are two small fairings, one for each wheel.

"Aerodynamically, it's about creating as few bumps on the surface as possible,” Hausman said in a press release. “The design also reduces shading of the solar cells by placing the canopy to the side."

It looks like a motorcycle with a sidecar from the front. But to keep the center of gravity in the car’s center, most of the heavy equipment is on what would be the passenger side. The car runs off a battery charged by sunlight.

About 100 students participated in the 2-year project, Hausman said. The project is completely student run, from design to construction and 22 will take the semester off to travel to Australia to race the car in October. The UM team has come in third place five times in the race, most recently in 2011. They are the reigning national champions but have yet to secure a world race victory.

The change in wheels will require the team to change its strategy, said Matt Goldstein, a senior in computer science and engineering who heads the team’s strategy in a press release.

“The new regulations will definitely stir the pot and I am excited to make our best shot at a championship,” he said.

The World Solar Challenge is Oct. 6-13 in Australia.

END_OF_DOCUMENT_TOKEN_TO_BE_REPLACED

Now is indeed the best time to invest in solar panels, especially if you want to double your ROI during the course of its lifespan. END_OF_DOCUMENT_TOKEN_TO_BE_REPLACED

Solar Discs May Harness Power Directly From The Space

Thousands of satellites can be sent into space that will come together and align to form a large solar generator. END_OF_DOCUMENT_TOKEN_TO_BE_REPLACED
Calculate How Much You Can Save By Going Solar!
Use The Web's Best Solar Calculator!