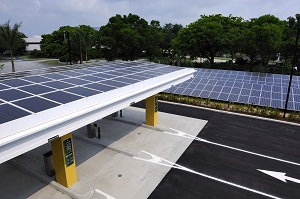 TD Bank said it unveiled the first net-zero energy bank in the U.S. last week (May 13). The Ft. Lauderdale, Fla., bank produces as much energy as it uses and is just the latest of TD Bank’s new energy-efficient banks with solar.

“Florida’s known as the sunshine state,” said TD Bank spokesperson Jimmie Hernandez. “Florida as a whole has been very open to our new design. It was a win-win for everyone.”

The net-zero energy bank was built according to the standards, which include solar-powered canopies over drive-up tellers, where they’re available, said Hernandez.

The company buys the photovoltaic arrays, according to Hernandez.

“The good thing about this investment is they will pay for themselves in seven years and they last much longer,” he said.

“If there’s a building where there’s no drive-thru then we won’t put in solar,” Hernandez said. “For the most part, the more than 20 stores we’ve built do have the solar canopies.”

The new Florida store has additional photovoltaic arrays, according to Hernandez.

“Aside from solar on the canopy, we decided to add more solar panels on roof and on land,” he said. “This particular location provided us with the opportunity because we had the space to do so.”

The green building designs are still new to TD Bank, and some of the new banks were proposed before the new design standard was in place, Hernandez said.

“It takes about two years to build a store,” he said.

That includes the time required to zoning and other requirements. Still, the design standards cover most of the new banks that it will open this year.

END_OF_DOCUMENT_TOKEN_TO_BE_REPLACED

With the launch of SolarAPP+, it is expected that solar energy suppliers will be more amenable to providing services in remote areas, as it will make it easier to conduct code inspections and ensure compliance to get their requests approved faster. END_OF_DOCUMENT_TOKEN_TO_BE_REPLACED

END_OF_DOCUMENT_TOKEN_TO_BE_REPLACED
Calculate How Much You Can Save By Going Solar!
Use The Web's Best Solar Calculator!