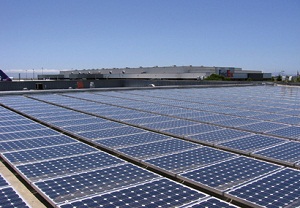 SunPower CEO Tom Werner spoke to shareholders at their annual meeting on Tuesday, May 3, about the opportunities and advantages the company’s new relationship with French oil giant Total will bring.

Total (Nasdaq: TOT) announced on April 28 that it would buy a 60 percent stake in U.S. solar company SunPower (Nasdaq: SPWRA).

Werner explained to shareholders Tuesday how the deal will impact the company and shareholders.

Total is offering $23.25 per share to SunPower stock owners and will tender the offer within 10 days of the deal announcement, Werner said. The oil company will only buy up to 60 percent of existing shares. That $23.25 price tag is still higher than the $21.32 the stock was trading at on Wednesday afternoon and is 46 percent higher than less than $16 per share SunPower was trading at on April 28.

Werner told shareholders that the new relationship with Total will make a big impact on business. Total has committed to making a $1 billion loan investment in SunPower over the next five years.

The new alliance will offer much beyond a financial investment, Werner told shareholders.

The company has already done significant solar research and development on its own, and SunPower will be able incorporate Total’s knowledge and investment in that area into its own business.

“Total is invested and has a presence in 130 countries,” Werner said, “many of which we have no presence in. We will be able to grow our influence in those regions.”

He also noted that Total has over 100,000 employees globally.

He said the outlook for the company is sunny and that SunPower is on track to meet its goal of producing high-quality solar panels for less than $1 per watt. The influx of capital through the new alliance with Total will only help innovation and cost-reducing measures progress, he said.

The company is opening a new manufacturing facility and expanding its offices and will be adding about 100 jobs over the next year, Werner told one shareholder.

Werner said he believes the partnership with Total will be healthy for SunPower.

“We have a shared belief that solar is the future,” Werner said of SunPower and Total.

END_OF_DOCUMENT_TOKEN_TO_BE_REPLACED

With the launch of SolarAPP+, it is expected that solar energy suppliers will be more amenable to providing services in remote areas, as it will make it easier to conduct code inspections and ensure compliance to get their requests approved faster. END_OF_DOCUMENT_TOKEN_TO_BE_REPLACED
Calculate How Much You Can Save By Going Solar!
Use The Web's Best Solar Calculator!