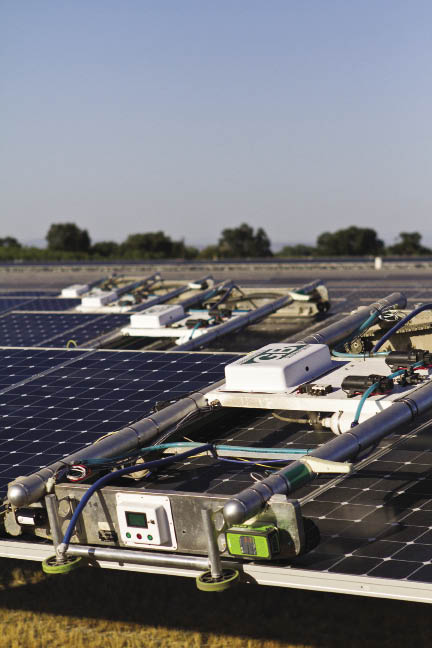 Sure, there’s Roomba, the disc-shaped vacuuming robot for your home. But what about something bigger, something on a commercial scale that could lead a company to triumph within its industry?

SunPower did not revel the financial details of the cash transaction. The company has been using Greenbotics CleanFleet robots to wash hundreds of megawatts of solar panels at its solar farms in the Southwest and West ,where dry and dusty conditions can leave panels dirty and reduce their efficiency.

Regular solar panel cleaning in dry and dusty regions can increase annual energy production by 15 percent, according to the company's release. But washing panels adds to the levelized cost of the power by increasing ongoing maintenance expenses.

The dry conditions that lead to increased dust collection on the solar panels make regular washing seem like a major expense and a wasteful proposition. The Greenbotics fleet, however, uses less than half a cup of water to clean each solar panel, which is about 90 percent less water than traditional cleaning methods require.

"Customers in markets such as the Western U.S., the Middle East and Chile will especially benefit, as dust and debris is a challenge and water is in shorter supply,” SunPower CEO Tom Werner said. “We are very pleased to add the valuable services offered by Greenbotics to our energy services offerings."

The West, Middle East and Chile are important markets for SunPower and a lot of the company's competition. These desert areas tend to have significant amounts of sun that make them ideal for solar power generation.

In addition to using less water, the Greenbotics robots save on labor expenses and can be deployed right when they’re most needed.  This eliminates the need to bring in cleaning crews on a regular schedule.  It also eliminates delays that occur when calling on such crews and having to wait a day or two before they’re available.

The robots can be configured for most solar panel and mounting types, including fixed-tilt and single-axis trackers.

Utility-scale solar power generation is now substantially more efficient in terms of the amount of land it uses for electricity generation than a decade ago. END_OF_DOCUMENT_TOKEN_TO_BE_REPLACED

END_OF_DOCUMENT_TOKEN_TO_BE_REPLACED

END_OF_DOCUMENT_TOKEN_TO_BE_REPLACED
Calculate How Much You Can Save By Going Solar!
Use The Web's Best Solar Calculator!