Stafford Participates in Next Round of Solarize Conn. 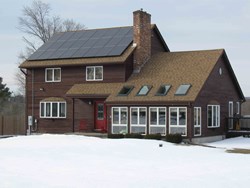 Connecticut has the second highest electricity rates in the country, falling behind only Hawaii in terms of energy costs.

With high rates like these, solar is competitive and the state boasts one of the fastest-growing solar markets in the country. That growth has been buoyed by the Clean Energy Finance and Investment Authority’s investment in popular solarize campaigns.

The authority recently launched the third phase of its Solarize Connecticut program.

Solarize campaigns have grown in popularity over recent years as a tool to bring down solar soft costs and encourage more people within a community to install solar panels on their homes and businesses.

Communities choose one installer who can achieve economies of scale by installing solar arrays on multiple residences in a single community. The installer then passes those savings onto customers.  The more solar a community installs, the greater the savings are to each customer.

Solarize Connecticut launched with a pilot program in 2012. It was so successful that Phase 2 started earlier this year.

The town of Durham, Conn, had 117 people sign up to install more than 1 megawatt of solar – impressive for a town of just 7,000 residents. The town reached its peak incentive level 47 days into the promotion, which demonstrates exactly how popular solarize programs have been in Connecticut towns.

The town of Stafford, Conn. is participating in Phase 3 of Solarize Connecticut.

“CEFIA is extremely proud of what we have been able to achieve through the Solarize program. We continue to see our financing tools and the Solarize model bringing down the cost of solar and making it affordable for more and more homeowners throughout Connecticut,” stated Bryan Garcia, President and CEO of CEFIA. “We expect to achieve similar success as we begin the next phase of this innovative program with the participation of town leaders and their dedicated volunteers.”

Stafford selected Ross Solar as its installer of choice.

These programs are often very beneficial to the installers, who are able to grow their business rapidly with the glut of new business that comes from local outreach efforts.

In addition to keeping the installations concentrrated in a small area, the solarize program helps to reduce what installers normally have to spend on marketing, especially when the community foots the bill for some of the program promotion.

The Satfford promotion officially kicks off Nov. 14. In order for residents to get the solarize discounts, they must contract for solar by Jan. 29.

Utility-scale solar power generation is now substantially more efficient in terms of the amount of land it uses for electricity generation than a decade ago. END_OF_DOCUMENT_TOKEN_TO_BE_REPLACED

END_OF_DOCUMENT_TOKEN_TO_BE_REPLACED

END_OF_DOCUMENT_TOKEN_TO_BE_REPLACED
Calculate How Much You Can Save By Going Solar!
Use The Web's Best Solar Calculator!