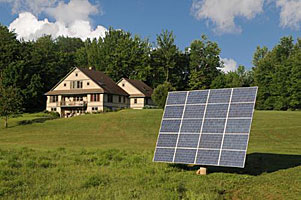 This is the 10th year in a row that the publication has recognized what it determines to be the 10 most important green building products.

“There are more ‘green’ building products than ever, but not all of them address a real need—or worse, some of them may create new problems down the road,” BuildingGreen founder and GreenSpec Executive Editor Alex Wilson said in a statement. “In selecting this year’s top-10 products, we looked for companies that solved pressing needs in energy efficiency, reduced toxicity in building materials, enhanced retrofit applications and offered unique solutions in other areas.”

Ritter XL Solar Thermal from Regasol was one of the products selected. The system uses Compound Parabolic Concentrating technology to supply naturally heated hot water in residential and commercial construction projects with a high demand for hot water, according to a write up about the company.

The AllSun Tracker from AllEarth Renewables was also recognized in the top 10.

The Vermont-based company manufactures a pole-mounted and GPS-enabled tracking system for traditional solar photovoltaic panels that stands up to wind and the elements while increasing the efficiency of the panel by about 45 percent, said AllEarth spokesman Andrew Savage.

The company’s founder, David Blittersdorf, has a history working with wind energy. He’d studied the wind and wind turbines.

The company had been focused solely on the Vermont market until earlier this year when it announced it would begin expanding into other states in the northeast.

“This recognition is really exciting for the company,” Savage said. “As we expand this lends credibility, it’s a good indication to people considering our technology that it’s valuable.”

Savage said he believes the technology was included among the top 10 because it makes solar tracking system accessible to residential development.

AllEarth Renewables has worked with homeowners who have a piece of land where the solar panels can be installed, which allows the array to follow the sun unobstructed and produce a large amount of energy using fewer panels than tradition rooftop installations.

Utility-scale solar power generation is now substantially more efficient in terms of the amount of land it uses for electricity generation than a decade ago. END_OF_DOCUMENT_TOKEN_TO_BE_REPLACED

END_OF_DOCUMENT_TOKEN_TO_BE_REPLACED

END_OF_DOCUMENT_TOKEN_TO_BE_REPLACED
Calculate How Much You Can Save By Going Solar!
Use The Web's Best Solar Calculator!