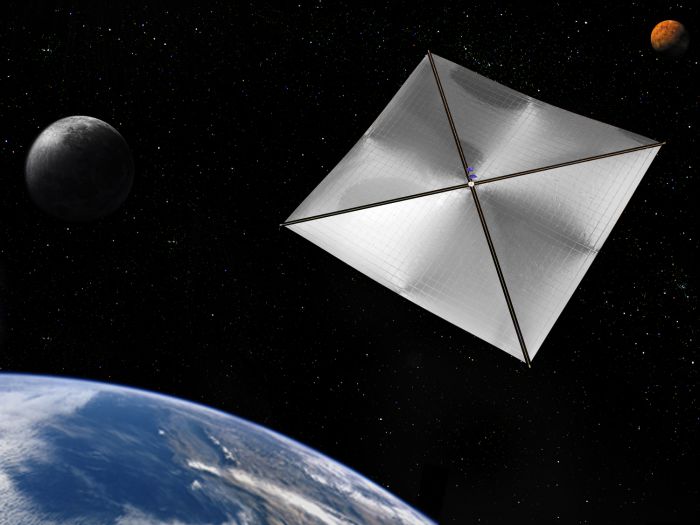 NASA’s upcoming demonstration of the 13,000-square-foot Sunjammer solar sail could be just the beginning for the technology.

Nathan Barns, Chief Operating Officer for L’Garde – the company that developed the solar sail – said it’s a technology that could revolutionize space measurements and exploration.

The demonstration sail will go to a spot about 1.5 million kilometers from earth, where there is equilibrium in the sun’s and earth’s gravity.

“If you sit there, you can kind of hang out there,” Barnes said.

The sail will keep the demonstration equipment steady and allow it to measure solar flares and try to learn enough about them to one day be able to predict them.

“We could go a little closer to the sun,” he said. “We could go 3 million kilometers, twice the distance, and we’d be in the sun’s gravity.”

But the solar sail could blow the equipment back from the sun to keep the firey ball from consuming it indefinitely. There is no end to how long the sail could sustain a location, Barnes said.

Previously, space craft would need massive fuel tanks, which could be vulnerable to the heat so close to the sun, and which wouldn’t last forever.

But that’s not even the end of the cool missions solar sails could pioneer, Barnes said. The sails could also move up and down from the line between the sun and earth where nearly all satellites orbit. They could create a triangle and allow for continuous monitoring of the earth’s poles. Barnes said there are satellites that can observe the poles as they rotate by, but none that can watch the poles constantly.

He also said solar sails could enable scientists to map the sun’s poles – something that has never been done before.

Since the solar sails have low thrust, they move more slowly through space, but L’Garde engineers have been working on developing a massive solar sail that could escape the solar system within 15 years.

“At that rate, it would outrun the Voyager,” Barnes said.

Utility-scale solar power generation is now substantially more efficient in terms of the amount of land it uses for electricity generation than a decade ago. END_OF_DOCUMENT_TOKEN_TO_BE_REPLACED

END_OF_DOCUMENT_TOKEN_TO_BE_REPLACED

END_OF_DOCUMENT_TOKEN_TO_BE_REPLACED
Calculate How Much You Can Save By Going Solar!
Use The Web's Best Solar Calculator!