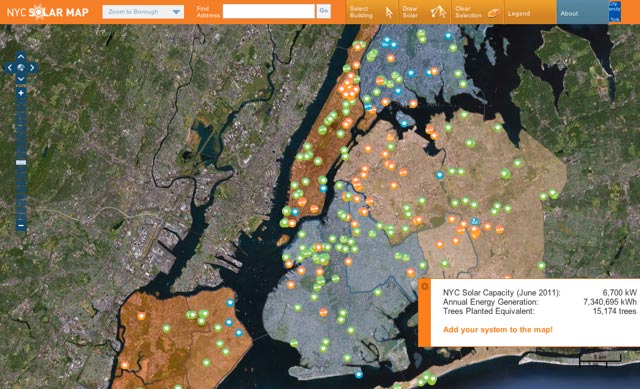 The City University of New York (CUNY) and its partners this evening unveiled the multi-pronged Solar Market Analytics, Roadmapping, and Tracking NY (SMART NY) project to make it easier for Big Apple denizens to put solar on their rooftops. Currently the application process alone can take up to a year to complete, so the SMART NY, supported with a DOE SunShot Initiative Rooftop Solar Challenge grant, effort couldn’t come at a better time.

CUNY and its partners in the project, IBM, Con Edison, Procemx, the Mayor’s Office of Long Term Planning and Sustainability, the New York State Energy Research and Development Authority (NYSERDA), the New York City Department of Buildings (DoB) and the New York City Economic Development Corporation introduced the project at the sixth annual NYC Solar Summit at CUNY. The project builds on the NYC Solar Map and will coordinate efforts to make it easier and less costly for NYC residents to go solar. If the program is successful under SunShot’s Phase 1 funding, which has targets going through next February, the effort could get a further round of funding. “If we meet those targets, then we would reach Phase 2 of funding efforts and then roll the tools out to other areas of New York,” said CUNY University Director of Sustainability Tria Case.

At the heart of SMART NY effort, is the NYC Solar Portal being developed by Procemx, and the Intelligent Operations Center (IOC) for Smarter Cities from IBM. The portal is an inter-agency portal that’s aimed at reducing the time it takes to apply for solar in the city. “As we initially benchmarked it, it could take a year to get from beginning to end of the application process. That’s when we realized we really need to focus on that,” Case said. Since then it’s been reduced. “But the goal is to really know where the holdups are,” she said.

That’s where the IOC comes in. “It’s two things, one is to monitor what is happening in terms of applications. Second is to look at actual solar production,” Case said. The systems will help the city gather data to analyze what’s happening in terms of applications, installations, costs and how solar is contributing to the grid, she said. Together they should help lower the balance of systems costs for New York City residents that want to go solar, by finding ways to streamline the process.

Part of the process also is to make the information more public. “Certainly the idea is to let folks know what is the real time frame fro getting through the permitting process,” Case said. It will also help track how much solar is being installed in New York and in what neighborhoods. As more people become aware of solar rooftops in their neighborhoods, it should help them consider solar for their homes as well.

Another barrier is how complicated the application process currently is. Depending on what homeowners want, they could have to submit applications to three or more agencies. “Right now NYC is looking at how to track the process. The first step is lets make it so customers, installers, agencies can see the process. As our final path we will look at what it would take to create a one stop application,” Case said.

Utility-scale solar power generation is now substantially more efficient in terms of the amount of land it uses for electricity generation than a decade ago. END_OF_DOCUMENT_TOKEN_TO_BE_REPLACED

END_OF_DOCUMENT_TOKEN_TO_BE_REPLACED

END_OF_DOCUMENT_TOKEN_TO_BE_REPLACED
Calculate How Much You Can Save By Going Solar!
Use The Web's Best Solar Calculator!