University uses solar to get closer to zero-carbon goal 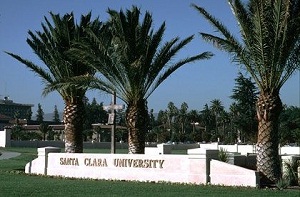 Santa Clara University, a private Jesuit school in California’s Silicon Valley, is using solar to get it closer to its net-zero carbon goal.

The University installed a new 1-megawatt system on the roofs of its event center, a recreation center and a parking garage late last month.

The school just received its first bill since the system went in, said Joe Sugg, who heads up the University’s energy program.

“So we’re still figuring out how much this will save us,” he said.

The University has made a pledge to be carbon-neutral by 2016, just five years off, Sugg said.

Sugg said the university is aggressively going after its goal to reduce its carbon emissions in order to meet its goal.

That means Santa Clara is using a diverse mix of green technologies to cut into its carbon emissions. It recently opened a new smart grid that will allow it to use its energy more efficiently and to produce its own power through biofuel, wind, solar and other production techniques.

The addition of this photovoltaic solar array doesn’t make a huge dent, Sugg said. It only accounts for 9 percent of campus use during peak production, Sugg said.

“But solar is a tremendous tool when it comes to shaving our peaks,” Sugg said.

The university uses the most energy during the summer, having peaks sometimes more than 20 percent greater than its average use, Sugg said.

“We’re penalized financially for big spikes in our peaks like that,” he said.

“Then we can use that money to invest in other technologies that will help us reduce our carbon footprint,” he said.

The 1-megawatt system has been added to a 50-kilowatt system installed on the university’s administrative building in 2007. It is expected to eliminate 23,000 tons of carbon dioxide emissions, which is equivalent to reducing gasoline use by 2.4 million gallons, according to a press release from the college.

Utility-scale solar power generation is now substantially more efficient in terms of the amount of land it uses for electricity generation than a decade ago. END_OF_DOCUMENT_TOKEN_TO_BE_REPLACED

END_OF_DOCUMENT_TOKEN_TO_BE_REPLACED

END_OF_DOCUMENT_TOKEN_TO_BE_REPLACED
Calculate How Much You Can Save By Going Solar!
Use The Web's Best Solar Calculator!