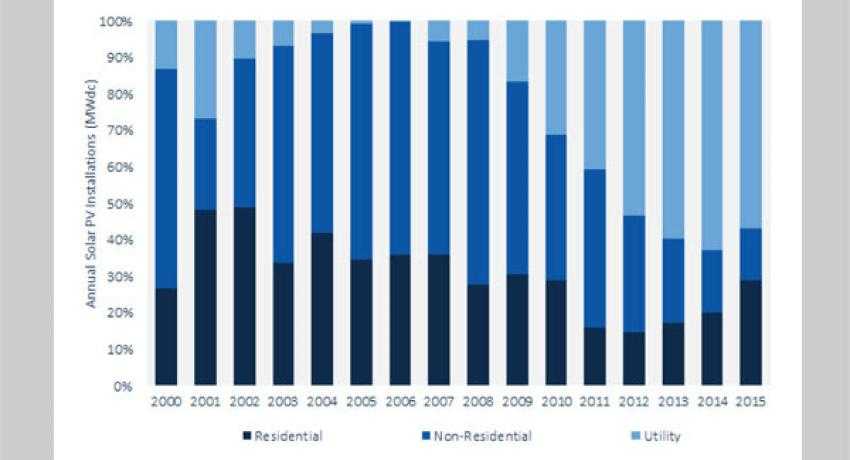 Homeowners who decided to install rooftop solar panels are some of the nation’s biggest new energy producers.

In fact, the residential rooftop solar industry broke multiple records in 2015, according to the US Solar Market Insight Report from GTM Research and the Solar Energy Industries Association. For the first time ever, Americans installed more than 2 gigawatts of rooftop solar last year. That represents a 66 percent increase over the number of rooftop solar installations in 2014.

A 66 percent increase sounds wildly impressive. And, in this case, it really is. It’s not as if we went from installing 20 panels to installing 33 panels. The residential solar industry has broken growth records every year since 2007. So, 66 percent growth at this level, is huge. We went from installing a whopping 1.3 gigawatts of rooftop solar in 2014 to more than 2 gigawatts in 2015. That’s a lot of solar. It’s enough to replace four or more coal-fired power plants – the kind that supply energy to whole populations of people.

The residential solar market led growth in the solar industry. Utility-scale solar installation increased by 6 percent and non-residential solar remained fairly flat. But solar, as an industry, was a powerhouse player in 2015. Accounting for 29.5 percent of all new energy supply in 2015, solar beat out natural gas for the first time.

While rooftop solar growth is soaring, the surprise is that it’s lighting up in new geographic areas. Solar installations topped 100 megawatts in 13 different states. Utah and Georgia saw some of the biggest increases in their solar markets. Utah, which was in 23rd place for installed solar capacity in 2014, jumped dramatically to 7th place in 2015. Georgia, likewise, climbed from 16th to 8th place.

While the top 10 solar states account for 87 percent of installed solar capacity nationally, GTM Research found that 24 of the 35 states it tracks saw significant solar industry growth over the last year, which indicates that solar is increasingly viable for homeowners and for utilities.

“Without a doubt, 2015 was a monumental year for the U.S. solar industry, and perhaps what’s most amazing is that we’re only getting started,” said SEIA president and CEO Rhone Resch. “Over the next few years, we’re going to see solar continue to reach unprecedented heights as our nation makes a shift toward a carbon-free source of energy that also serves as an economic and job-creating engine.”

Utility-scale solar power generation is now substantially more efficient in terms of the amount of land it uses for electricity generation than a decade ago. END_OF_DOCUMENT_TOKEN_TO_BE_REPLACED

END_OF_DOCUMENT_TOKEN_TO_BE_REPLACED

END_OF_DOCUMENT_TOKEN_TO_BE_REPLACED
Calculate How Much You Can Save By Going Solar!
Use The Web's Best Solar Calculator!