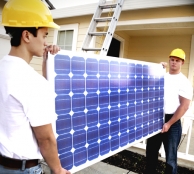 When San Diego first requested California Solar Incentive funds in 2006, utility-scale and commercial installations were expected to dominate the solar installation landscape in the state.

Leasing and third-party solar panel ownership changed all of that, however, and the California Center for Sustainable Energy, (CCSE) which manages the San Diego program for San Diego Gas & Electric, ran out of money for residential systems at the beginning of this year.

The organization has been waitlisting homeowners who applied for incentives to fund residential solar installations.

Third-party financing allows homeowners to install rooftop solar panels with no money down and either lease the solar panels or buy the power they produce back from third parties like Sunrun and SolarCity, usually at a discount over the cost of electricity from the utility company.

This type of funding mechanism has made it easier and more affordable for homeowners to go solar, which has created significant growth in the residential solar market across parts of the country where policies promote the model.

CCSE successfully convinced the California Public Utilities Commission at the end of October to transfer $5 million in incentives from funds previously dedicated to utility and commercial solar installations to residential systems instead.

Originally, only one-third of the $202 million CSI funding was originally allocated to residential solar installations.  By January 2013, CCSE had already reached its 10-year goal for homeowner installations – more than four years ahead of schedule.

“Removal of the specific allocation of two-thirds of the program’s 180 megawatts for the nonresidential sector will allow the program to more effectively reach its overall goals and encourage more San Diego homeowners to install rooftop solar,” CCSE Executive Director Len Hering said.

The organization and CSI funding it has already distributed incentivized 15,000 solar photovoltaic installations, generating more than 75 megawatts of electricity. The additional $5 million is expected to incentivize another 25 megawatts of residential solar in the San Diego area.

CCSE stopped funding residential solar incentives for San Diego Gas & Electric customers earlier this year and placed applicants on a waiting list, saying that some projects might not be completed and the funding for their incentives would again become available.

CCSE staff said they would prioritize those waitlisted projects as they begin sorting through residential solar applications again.

Utility-scale solar power generation is now substantially more efficient in terms of the amount of land it uses for electricity generation than a decade ago. END_OF_DOCUMENT_TOKEN_TO_BE_REPLACED

END_OF_DOCUMENT_TOKEN_TO_BE_REPLACED

END_OF_DOCUMENT_TOKEN_TO_BE_REPLACED
Calculate How Much You Can Save By Going Solar!
Use The Web's Best Solar Calculator!