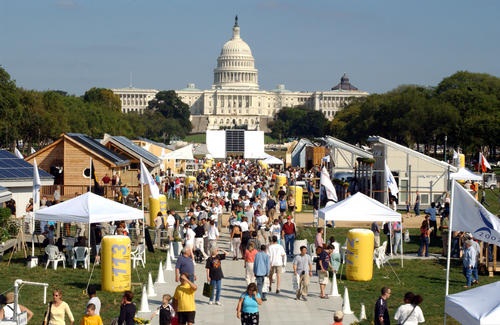 Although Congress has yet to establish national renewable energy standards (RESs), states are leaping ahead and passing laws to increase the use of photovoltaics and other renewable energy sources in their states. Utilities in states with RES standards or rules are required by law to buy or generate a certain percentage of their power from renewable sources by a particular time, like 2020.

These RESs help encourage growth in renewable markets, particularly concentrated solar power, photovoltaic, and wind. Renewables like solar and wind are looking more attractive to states and utilities as they realize the long-term benefits of wind and solar include never having to pay for fuel like coal or oil, which means price stability for the consumer.

While the federal government hasn’t established a national standard, the majority of states—more than 30—have enacted RESs (also known as renewable portfolio standards). The highest RES as of June 2010 is at 40% by 2030, 33% by 2020 and the lowest are at 10% by 2015. Since the federal government hasn’t established guidelines as to what constitutes renewable energy, different states accept different sources of energy renewable. For instance, some states, like New York, consider large-scale hydroelectric power plants a renewable energy source, while others don’t.

Accompanying most of these are various federal, state, and local incentives to help reduce the cost of installing solar and other renewables on their homes and buildings, Clean Energy Authority has compiled information about what incentives exist in your state.

States with the highest RESs:

•Hawaii signed into law the nation’s highest RES to date, 40% by 2030. The state’s goal is to have 70% of all its energy come from clean sources by 2030. According to the state’s website, 90% of its electricity comes from petroleum. Hawaii has a partnership with the Department of Energy (DOE), together they established the Hawaii Clean Energy Initiative. Under that initiative, the DOE will help Hawaii transition to 100% renewables on the smaller islands. Overall, it could reduce Hawaii’s use of petroleum by 72%, according to the Database of State Incentives for Renewables and Efficiency (DSIRE).

•California has the nation’s highest RES goal for 2020. Gov. Arnold Schwarzenegger issued an executive order in Sept. 2009 requiring that 33% of the energy supplied by utilities comes from renewables in 2020. There are some measures that could technically defeat the executive order, but so far no one has challenged the mandate. Considering California’s large size and high population, it will likely be the nation’s largest consumer of renewables for the next decade and beyond. Luckily the state has great solar, wind, and geothermal resources.

•In colorful Colorado, Gov. Bill Ritter signed into law in 2010 the nation’s highest RES law for 2020. Under the law, 30% of the electricity produced by Colorado’s investor-owned utilities (IOUs), which power most of the state, must come from renewables by 2020. The majority of this will come from Colorado’s vast wind and solar resources. But the state also has a lot potential geothermal power resting under the Rockies. Colorado’s RES law includes a 3% distributed generation carve-out, which means that 3% of the power utilities provide will come from small, independent power providers, like photovoltaic installations on homes and buildings. Colorado’s electric co-ops, as of 2010, are only required to source 10% of their electricity from renewables by 2020.

•Minnesota, home of Xcel Energy, established two RESs. One is specific to Xcel, which must produce 30% of its electricity from renewables by 2020. Xcel must source the majority of its renewables from wind, 24%, and no more than 1% from solar, since Minnesota is a northern state with limited solar resources but good wind resources, this makes sense. The remaining 5% of Xcel’s renewables can be from other forms of renewables. Other utilities in Minnesota must produce 25% of their energy from renewables by 2025.

•New York has an RES requiring that 29% of its power come from renewables by 2015. But approximately 20.7% of the 29% goal will come from existing renewable energy facilities, like hydroelectric power produced at Niagara Falls. The rest will come from new sources, including photovoltaics, tidal power, and wind.

•Connecticut’s RES requires that 27% of its power comes from renewable sources by 2020. Connecticut will use solar, wind, ocean thermal power, wave or tidal power, and other sources to meet its RES standard. The RES was first established in 1998.

Other States With RESs:

A number of states have set renewable energy standards at 25%. These include Illinois, Nevada, West Virginia, Ohio, and Oregon. All of these become effective by 2025. New Hampshire’s RES is slightly lower, at 23.8% by 2025. And New Jersey’s RES of 22.5% becomes effective in 2021.

Pennsylvania set a slightly lower RES of 18% by 2020 and is followed by Rhode Island’s 16% RES by 2019. A number of states, including Montana, Oklahoma, Washington, Missouri, Arizona, Massachusetts, and Virginia have set a 15% RES. North Carolina set a 12.5% RES that becomes effective in 2021.

Maine established an RES to increase new renewable-energy capacity to 10% by 2017. The state also has an RES of 40% by 2017. But that standard includes generators under 100 megawatts that are fueled by municipal solid waste, electricity generated by combined heat and power (CHP) systems and generators that, under the federal Public Utility Regulatory Policies Act of 1978, qualify as “small power production facilities." Other states that have 10% RESs are Wisconsin, North Dakota, and South Dakota. Florida has the weakest RES of 7.5% by 2015.

Approval is expected soon on Gemini, a huge 7,000+ acre solar farm served by Warren Buffet’s NV Energy, thus making it the largest solar farm in all of America. END_OF_DOCUMENT_TOKEN_TO_BE_REPLACED

END_OF_DOCUMENT_TOKEN_TO_BE_REPLACED

END_OF_DOCUMENT_TOKEN_TO_BE_REPLACED
Calculate How Much You Can Save By Going Solar!
Use The Web's Best Solar Calculator!