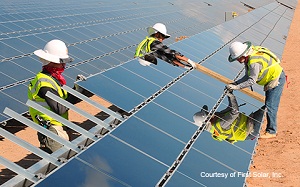 Sometimes things slip into place like the intricate gears of a clock. That’s kind of how everything happened with the release of the Department of Energy’s (DOE’s) $976 million loan guarantee and NRG Energy, Inc. (NYSE: NRG) subsidiary NRG Solar’s purchase of the 290-megawatt Agua Caliente project in Yuma, Ariz.

“We’re very pleased the DOE saw the merits of this important project,” said NRG spokesperson Lori Neuman. Financing for the project was arranged with the DOE. However, financial details of the agreements were not disclosed.

With the closing of the loan guarantee and financing arranged, construction on the project can start later in August, she said. That means the project breaks ground before the Sept. 31, 2011, deadline under the now closed loan guarantee program.

“Agua Caliente demonstrates the extraordinary progress the U.S. has made to achieving energy independence through public-private collaboration and technological innovation,” Tom Doyle, NRG Solar CEO said in a press release. “Construction of the Agua Caliente system will create hundreds of new jobs in local communities, supporting economic growth alongside environmental sustainability. The sheer scale of the project will also help drive developments needed to deploy even larger and more efficient clean-energy resources in the future.”

During the construction phase, the Agua Caliente solar project is expected to create up to 400 construction jobs. Afterward, it will create 10 full-time operating positions, according to NRG. After construction, NRG will sell the power generated at the site to Pacific Gas & Electric Co. under a 25-year power-purchase agreement.

It will take some time before the project is online, however.

One of the unique things about the Agua Caliente project—aside from its sheer scale, likely being the largest in the world when completed—is the installation of new technologies. The fault ride-through and dynamic voltage regulation technologies are expected to improve the reliability and predictability of the electricity the array supplies to the grid, according to the DOE.

Utility-scale solar power generation is now substantially more efficient in terms of the amount of land it uses for electricity generation than a decade ago. END_OF_DOCUMENT_TOKEN_TO_BE_REPLACED

END_OF_DOCUMENT_TOKEN_TO_BE_REPLACED

END_OF_DOCUMENT_TOKEN_TO_BE_REPLACED
Calculate How Much You Can Save By Going Solar!
Use The Web's Best Solar Calculator!