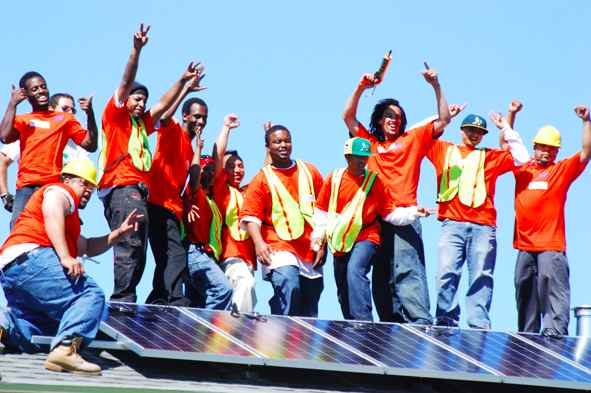 Mosaic, a company that uses crowdfunding to finance solar projects, just completed its first project that will pay back investors with interest.

The California startup installed a 47-kilowatt solar array on the roof of a youth employment center in Oakland. The people who invested in the project – just regular people who are familiar with Mosaic – are expected to make 6.38 percent annual interest on their investment over a 60-month period.

“The thing about this is we’re trying to structure it as a win win deal all around,” said Lisa Curtis, spokeswoman for Mosaic. “We’re still able to save solar customers money while generating revenue for our investors.”

This is the sixth crowdfunded solar project Mosaic has completed. But investors in the first five projects are being paid back what they loaned with no interest.

“We found that with no interest, the money was coming out of people’s donation pockets and they don’t give as much as maybe they would if they were getting a return,” Curtis said.

Mosaic has been working with the Securities Exchange Commission for a little more than a year to be able to offer crowdfunding options that offer a real return on investment of 4 to 7 percent interest annually to the people who will be able to invest as little as $25 in a specific project. Anyone looking to invest, can visit the crowdfunding site: www.joinmosaic.com.

The innovative funding model answers a lot of financing questions in the solar world.

Mosaic works as a solar developer and owns, operates and maintains the solar arrays it installs, selling the power back to the entity that wanted it, like the youth employment center, through a power purchase agreement.

It’s a common model and means solar developers are under a lot of pressure to get up-front financing so it can keep building projects and generating revenue.

“Only about 1 percent of the banks in the country finance solar projects,” Curtis said.

That means financing is hard to fund and comes at a premium.

Reaching out to the crowd means projects can get lower cost capital, reducing the overall expense of projects. It also means investors stand to make solid returns they won’t get in banks.

Mosaic is still working with the SEC. The Oakland project was only open to Mosaic “friends and family” who knew the company and what they were getting into, Curtis said.

“There is a bright light at the end of the tunnel,” Curtis said about negotiations with the SEC. “We’re getting really close.”

She said Mosaic dropped solar from its name because founders believe the model could work for other renewable energy technologies as well.

END_OF_DOCUMENT_TOKEN_TO_BE_REPLACED

With the launch of SolarAPP+, it is expected that solar energy suppliers will be more amenable to providing services in remote areas, as it will make it easier to conduct code inspections and ensure compliance to get their requests approved faster. END_OF_DOCUMENT_TOKEN_TO_BE_REPLACED
Calculate How Much You Can Save By Going Solar!
Use The Web's Best Solar Calculator!