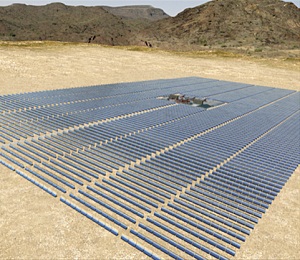 In Morocco, both a 200 megawatt and a 100 megawatt concentrating solar power array will be partly financed though a 654 million euro ($902.9 million) loan from Germany’s state-owned KFW bank. The financing will provide funding for more than a third of the anticipated 1.7 billion euro ($2.3 billion) cost of the projects.

The first project, Noor II, will be a 200 megawatt CSP parabolic mirror project. The project is being led by Abengoa, GDF's International Power and ACWA Power of Saudi Arabia. The other project, the 100 megawatt Noor III project, is being planned as a solar tower project, according to Reuters, which broke the story. It was reported that the same groups are also pre-qualified to submit proposals for Noor III, as is a consortium led by France’s EDF. The first phase of the Noor projects, the 160 megawatt power plant, is already being built by ACWA Power.

These projects comprise part of Morocco’s roughly 500 megawatt series, which is being built near Ouarzazate.  They are part of the Moroccan Agency for Solar Energy (MASEN), which is coordinating the country’s efforts to install 2 gigawatts of solar by 2020, a goal that was set forth in 2009. It 's anticipated that by 2020, solar would represent 14 percent of the nation’s electricity generation. The first plants are set to go online in 2015, according to MASEN. The final tenders for the proposed projects are expected to come in the next few weeks, said MASEN head Mustapha Bakoury at the Desertec industrial initiative (Dii) Conference near Rabat.

Other funds to the support the projects are anticipated from the World Bank, which is expected to provide 300 million euros ($413.1 million). Roughly the same is expected from both the African Development Bank and the European Investment Bank, Reuters reported.

The Noor projects are just one of five large areas that Morocco has identified for solar projects. The other locations are in Ain Bni Mathar, Foum Al Oued, Boujdour and Sebkhat Tah. The country is increasingly looking to produce its own power instead of importing it from Spain, especially now that demand for energy in the country has grown on average by about 7 percent per year.

Utility-scale solar power generation is now substantially more efficient in terms of the amount of land it uses for electricity generation than a decade ago. END_OF_DOCUMENT_TOKEN_TO_BE_REPLACED

END_OF_DOCUMENT_TOKEN_TO_BE_REPLACED

END_OF_DOCUMENT_TOKEN_TO_BE_REPLACED
Calculate How Much You Can Save By Going Solar!
Use The Web's Best Solar Calculator!