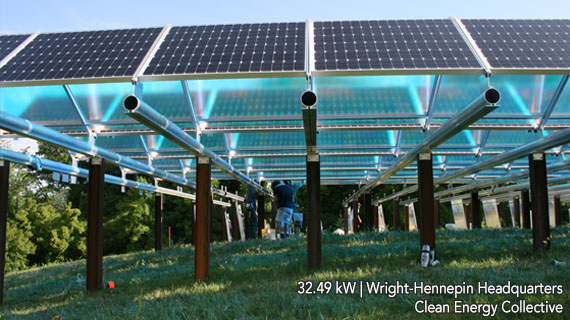 Community solar gardens allow homeowners and businesses to invest in and reap the rewards of solar power, even if they can’t put it on their home or business. Basically a company will build a solar array and sell off the individual modules in the array to people who want solar power but can’t install it because they rent or lease their home or their business can’t host a solar array. The power generated by their share of modules in the solar garden then offsets their use of electricity. One of the largest states for community solar gardens is another state where Xcel has a significant presence, Colorado.

The key issue is the rate that Xcel wants to credit community solar gardens for their generation. The company filed to credit such generation facilities at 10.1 cents per kilowatt hour produced for residential customers and 6 cents per kilowatt hour for commercial customers. “There is no way you can make it work at 10 cents,” Ken Bradley, CEO of Minnesota Community Solar, told the Star Tribune. His company is building the first community solar garden in Minneapolis.

This is Xcel’s first offering for community solar gardens in Minnesota. The company is making the offering in response to legislation (HF 956) passed earlier this year and signed into law by Gov. Mark Dayton (D). That legislation, known as the Omnibus Energy Bill, has farther solar ambitions for the land of 10,000 lakes. Under the bill, all of Minnesota’s utilities must source 1.5 percent of their electricity from solar by 2020. This will increase the state’s renewable portfolio standard 26.5 percent by 2025.

“Although 1.5 percent may seem low, compared to Minnesota’s existing solar capacity, it is actually quite high,” stated a spokesperson with the Center for Climate and Energy Solutions. “Currently, Minnesota has 13 megawatts (MW) of solar energy capacity, but in order to reach the 1.5 percent standard, the state will have to increase its solar capacity to 450 MW, more than a 30-fold increase,” the spokesperson added.

Xcel won’t be developing the first community solar garden in Minnesota. The first was installed by Colorado’s Clean Energy Collective in Rockford, Minn. That 40-kilowatt array is benefitting customers of Wright Hennepin Cooperative Electric Association. Not only was it the first community solar garden in Minnesota, it’s also the first in the U.S. to include battery storage. It was sold out even before construction began this past June.

Utility-scale solar power generation is now substantially more efficient in terms of the amount of land it uses for electricity generation than a decade ago. END_OF_DOCUMENT_TOKEN_TO_BE_REPLACED

END_OF_DOCUMENT_TOKEN_TO_BE_REPLACED

END_OF_DOCUMENT_TOKEN_TO_BE_REPLACED
Calculate How Much You Can Save By Going Solar!
Use The Web's Best Solar Calculator!