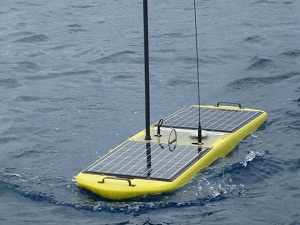 The robots are packed with technology that allows them to operate independently in remote locations. They’re being used by companies, scientists and countries to monitor ocean conditions.

“Liquid Robotics has delivered over 50 Wave Gliders to date,” said David Bailard, product marketing manager with Liquid Robotics. “We expect this installed base to triple over the next year.”

The Wave Gliders consist of a floating photovoltaic array that’s attached to a finned glider. The assembly contains sensors, which can be customized to clients’ needs, and a transmitter.

The Wave Gliders can be deployed for years at a time, without any maintenance. They’ve been deployed in locations including the West Coast of North America, from California to Alaska, around the coast of Hawaii, in the Gulf of Mexico and off Norway.

The National Oceanic and Atmospheric Administration (NOAA) is also using the Wave Gliders in at least two operations, Bailard said.

“NOAA is conducting sea trials of two Wave Gliders fitted with CO2 sensors to measure carbon dioxide flux between the ocean and the atmosphere,” he said. The agency also is using the devices to monitor real-time atmospheric conditions in the Gulf of Mexico.

The robots, starting at $140,000, are expensive, but they offer a far less costly method of monitoring the ocean. The company also offers a subscription service to data collected by the company’s fleet of robots. That service is between $300,000 and $500,000 annually. Though costly, it’s still far less than manning a ship to do similar research. It costs between $30,000 to $70,000 a day to stage deep-ocean operations on a ship.

“While the base price for a Wave Glider is approximately $140,000, a fully loaded Wave Glider can run over $500,000, depending on the configuration of advanced sensors and additional electronic systems required,” Bailard said. “Subscriptions can cost more than the purchase price for a Wave Glider because Liquid Robotics is providing launch, recovery, 24/7 piloting and maintenance services for the robots we use to deliver data to the customer.”

While the company will continue selling the robots, it’s looking to expand its subscription services.

“A long-term emphasis of the company is on developing more subscriptions for the oceanic data collected by Wave Gliders, building and expanding a Data-as-a-Service cloud to provide ocean data to customers,” Bailard said.

Utility-scale solar power generation is now substantially more efficient in terms of the amount of land it uses for electricity generation than a decade ago. END_OF_DOCUMENT_TOKEN_TO_BE_REPLACED

END_OF_DOCUMENT_TOKEN_TO_BE_REPLACED

END_OF_DOCUMENT_TOKEN_TO_BE_REPLACED
Calculate How Much You Can Save By Going Solar!
Use The Web's Best Solar Calculator!