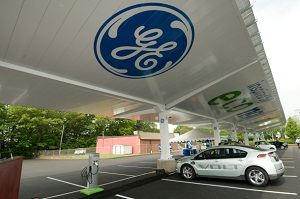 The new charging station, which follows on the heals of GE’s national tour to promote the most popular electric vehicles manufactured by Ford, Toyota, Nissan, GM, Mitsubishi, Coda, Smith Electric Vehicles, Navistar, Smart and Think, will provide enough juice to fully charge 13 electric vehicles a day and power the overhead lights, according to a release from GE.

“The GE EV Solar Carport is a local demonstration of the expansive horizon GE envisions for renewable energy within the EV ecosystem developed by GE Energy Industrial Solutions to provide clean energy alternatives to oil and biofuels” Angela Strosnider, spokeswoman for GE, wrote in an e-mail.

The carport stands about 14 feet tall and produces 125 megawatts of electricity a year, which is enough to power about 20 homes, according to GE’s release.

The system shows GE’s support for electric vehicles and the accessibility of infrastructure for increased use of clean and efficient electric vehicles. The company could deploy similar charging stations around the country.

“We see anywhere you park your electric vehicle as a great opportunity for charging infrastructure,” Luis Ramírez, GE CEO, was quoted in the release. “Now we also lead the future of electrification for electric vehicles with supplied power from the sun.”

The solar-powered electric vehicle charging station in Plainville, Conn., is designed to make drivers more comfortable with an electric vehicle option, executives said in the press release. Most electric vehicles can travel 40 to 50 miles on a single charge, and most Americans drive fewer than 30 miles in the average day, according to GEs release.

“Consumers want the convenience and peace of mind knowing they can get from point A to point B without running out of energy,” Ramírez said. “GE is working with a number of utilities and municipalities, in the U.S. and abroad, to address this issue of creating a widely distributed network of electric vehicle charging stations. The presence of ubiquitous, Level 2 charging will make consumers far less worried about their car running out of power.”

END_OF_DOCUMENT_TOKEN_TO_BE_REPLACED

With the launch of SolarAPP+, it is expected that solar energy suppliers will be more amenable to providing services in remote areas, as it will make it easier to conduct code inspections and ensure compliance to get their requests approved faster. END_OF_DOCUMENT_TOKEN_TO_BE_REPLACED

END_OF_DOCUMENT_TOKEN_TO_BE_REPLACED
Calculate How Much You Can Save By Going Solar!
Use The Web's Best Solar Calculator!