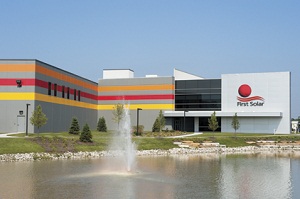 First Solar reported higher than expected earnings for the third quarter of 2013. The positive results were largely based on the sale of the Amherstbur, Belmont and Walpole (ABW) solar power plants in Canada, as well as revenue from Desert Sunlight project.

“We had been expecting an uptick to $1.00 in 3Q and $1.80 in 4Q—the industry's typical seasonal progression, which tends to peak in 4Q,” wrote Raymond James Equity Analyst Pavel Molchanov. “But if any evidence was needed that estimates in the solar space are rarely more than guesses, 3Q provides a textbook case study. Adjusted EPS of $2.28 (and even GAAP EPS of $1.94, which includes an asset impairment) were double our estimate, same as consensus, of $1.00.”

The company sold the ABW projects in Canada in August to General Electric's Energy Financial Services division and started realizing revenue from Desert Sunlight. “The higher systems revenue is primarily attributed to the initial revenue recognition for Desert Sunlight and the sale of the ABW projects in Canada,” explained Mark Widmar, First Solar’s Chief Financial and Accounting Officer. “It is important to note that as expected, Desert Sunlight contributed materially and disproportionately to results of the quarter.”

Molchanov was mostly satisfied with the company’s earnings for the quarter. “Even being the natural skeptics that we are, we struggle to find much to criticize in 3Q,” he said. He observed, however, that First Solar’s earnings and projections have been on a “see-saw" for the past year, pointing to its continually revised guidance up and down. He also noted that while the company has a project pipeline through 2014, its guidance for 2015 seemed to high.

Nonetheless First Solar updated its 2013 guidance. “Beginning with net sales, we are lowering the range mid-point of $3.7 million to a new mid-point of $3.5 million to account for probable revenue recognition risk that could cost the economic associated with one of more of our project to slip in to next year,” First Solar's Widmar stated in a Seeking Alpha transcript of the earnings conference. He added that increased revenue recognition from Desert Sunlight will help offset that decline. “Consequentially, we are raising our gross margin range to 24 percent to 26 percent. Our operating income range to $470 million to $490 million and our earnings per share range to $4.25 to $4.50 per share, an increase of approximately $0.40 to the mid-point compared to prior.”

Looking forward, the company now has 2.7 gigawatts of projects in its pipeline, according to First Solar CEO Jim Hughes. The company is also improving the efficiency of its modules, which are now at 14.1 percent efficiency.  While this efficiency level is creeping up, its costs are falling. “We have had the largest quarterly decline in our cost per watt since 2007, falling 8 cents to 59 cents on average in Q3 and in line with our competitor's reported cost per watt. Excluding freight, recycling and warranty charges, our core figure is now below 50 cents—49 cents to be exact, the lowest in the industry,” he added.

While Molchanov affirmed Raymond James’ market perform rating after the earnings based on First Solar’s likely achievable goals for 2013 and 2014, he noted there may some additional risk in the long-term.

Utility-scale solar power generation is now substantially more efficient in terms of the amount of land it uses for electricity generation than a decade ago. END_OF_DOCUMENT_TOKEN_TO_BE_REPLACED

END_OF_DOCUMENT_TOKEN_TO_BE_REPLACED

END_OF_DOCUMENT_TOKEN_TO_BE_REPLACED
Calculate How Much You Can Save By Going Solar!
Use The Web's Best Solar Calculator!