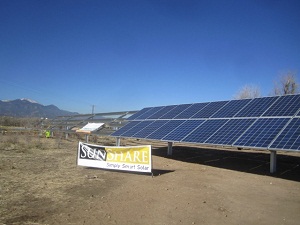 The company’s contractors, RGS Energy, installed the first panels and held a groundbreaking on Nov. 29, attended by Colorado Gov. John Hickenlooper, local officials and well over 100 people—oh and Occupy Denver. It was a cool, sunny fall day, a good day for solar.

“Venetucci farm is a priceless community asset. This is probably the first place in the Pikes Peak region where water was diverted out of Cotton Creek to grow food for people, and 150 years later this place is still productive and a wonderful community asset,” said Pikes Peak Community Foundation Executive Director Michael Hannigan.

The organization manages the farm.

“We're here to make a little more history today with the solar garden at Venetucci Farm. A very nice little connection between the past and the future,” he said.

The community solar garden was recently made possible by a local tariff passed by Colorado Springs’ city council.

“On Sept. 27, we voted unanimously as a city council to pass a tariff to allow solar gardens in Colorado Springs,” said city council member Brandy Williams at the groundbreaking.

The project was made possible with the support of Colorado Springs Utilities, a municipal utility.

“It's really exciting that customers have the possibility of being able to participate in solar energy at a much lower scale,” said Jerry Forte, the utility’s CEO.

Customers in Colorado Springs can lease two panels for $1,100 with a 20-year lease through the project.

SunShare is a startup founded by young entrepreneur David Amster-Olszewski.

“So far SunShare has added six full-time employees, all under the age of 30, three part time employees, five interns and 15 indirect construction related jobs that were created using a Colorado-based installation company,” said Colorado City Councilperson Jan Martin. “I don't think I've ever been as proud of a project as I am of this one.”

At this point only a fraction of the modules are left up for grabs, Amster-Olszewski said.

“We have about 900 solar panels left in the solar garden and my guess is they'll be gone in a couple of weeks,” he said.

Utility-scale solar power generation is now substantially more efficient in terms of the amount of land it uses for electricity generation than a decade ago. END_OF_DOCUMENT_TOKEN_TO_BE_REPLACED

END_OF_DOCUMENT_TOKEN_TO_BE_REPLACED

END_OF_DOCUMENT_TOKEN_TO_BE_REPLACED
Calculate How Much You Can Save By Going Solar!
Use The Web's Best Solar Calculator!