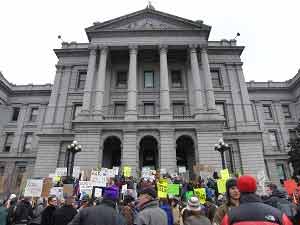 (Feb. 25) – Apropos of an overcast, gray sky, the solar industry in Colorado is feeling gloomy today.

Solar industry leaders and installers in the state marched on the Capitol building to protest Xcel Energy’s decision to reduce its Solar Rewards program ahead of schedule.

Neal Lurie, executive director for the Colorado Solar Energy Industries Association, addressed the crowd of a few hundred on the steps of the Capitol at noon.

“If Xcel Energy and Black Hills Energy cannot create a stable market place, then we need a third party, independent administrator to make sure they can,” said Lurie. “They are on notice. They have to get a stable marketplace now.”

Demonstrators held banners, signs, and wore thick coats as the event went on. The temperature hovered around 20 degrees.

“None of us wanted to be here today, but we knew we had to come down and let our community know of the devastating impact,” said Jim Burness, chief operating officer of SolSource, a Colorado-based solar installation firm. “We built this industry from almost nothing in 2000 to almost 5,000 workers today, and Xcel shut the entire industry down overnight.”

Burness said that there is a conflict of interest surrounding Xcel’s ability to oversee the state incentives.

“Xcel has proven they are not a trustworthy partner in this new energy economy whatsoever,” he said.

Xcel has said that the choice to reduce the rebate was in line with the cost of solar. In order to keep the solar industry healthy and guide it toward self-sufficiency, the rebate must be reduced as costs go down, slowing removing the rebate as the industry becomes healthy enough to compensate.

But Burness questioned that logic.

“How do they know what are costs are?” he said. “I didn’t get a call from them.”

He said that fossil fuels currently get 12 times the subsidies of clean energy. According to an August study by Bloomberg New Energy Finance, that number worldwide is about 10 times.

“All we want is Xcel to stick to what they promised and keep the plan they had in place instead of pulling the rug out from underneath us,” said Burness. “What Xcel has done is a slap in the face of Colorado voters. Even worse, it will create a lot of pain for the Colorado economy in a time when we need more local jobs, not fewer.”

Lurie looked beyond the installers and industry leaders in the crowd as well.

“This doesn’t only affect people working in the industry today,” he said. “It also affects thousands of students who are looking at what their future is going to look like.”

One of those students is Scot Wooley, a Colorado native who is the president of the University of Colorado’s energy club.

“I want a green job; I want to push this industry forward,” he said.

The CU energy club, according to Wooley, now has 1500 members. He said that number is encouraging.

“This explosive growth indicates to me that there are a lot more students in this country, in this state and around the world, who want a job in the clean-energy economy that Colorado has become famous for,” he said. “Colorado already has a leadership platform. We’re already ahead of the game, and we’re pushing the limits of innovation, but right now this innovation is being threatened.”

For some, Xcel’s lowered rebate means fewer job opportunities as solar installers scale down operations in order to remain profitable. But all hope is not lost for Wooley.

“As a student who feels threatened right now, as someone who wants a clean energy job, I’m reassured by all the smiling faces I see in the crowd,” he said. “But it’s not over. We need to stand shoulder-to-shoulder and fight for our clean energy future, so let’s do it.”

One unexpected speaker at the event was Colorado Representative Joe Miklosi (D – Denver), who was, according to legislative aide Stephanie Stoetzer, invited to the event by one of his constituents.

He, too, addressed the crowd

“I want to make this state the renewable-energy capital of the country,” said Rep. Miklosi. “The recent actions by Xcel have taken us in a very different direction. They need to be a partner, not an obstacle to what we want to do with this economy.”

Rep. Miklosi told the crowd about an unnamed solar executive in his district who was about to expand and hire for three new positions, but decided against it after the news of Xcel’s reduction hit.

“That upsets me, and that’s wrong,” he said. “I’m going to do everything I can to influence the PUC [Public Utilities Commission] to make sure they reject the Xcel proposal.”

Lurie told everyone in the crowd to contact the PUC and their representatives and ask them to do the same.

And with that, the crowd dispersed, dragging their signs, many of them reading “Xcel killed my green job.”

Approximately three blocks away is the unemployment office.

And before the protesters had even left the stairs of the Capitol, the line of Coloradoans requesting unemployment benefits was already threatening to wrap around the next block.

Utility-scale solar power generation is now substantially more efficient in terms of the amount of land it uses for electricity generation than a decade ago. END_OF_DOCUMENT_TOKEN_TO_BE_REPLACED

END_OF_DOCUMENT_TOKEN_TO_BE_REPLACED

END_OF_DOCUMENT_TOKEN_TO_BE_REPLACED
Calculate How Much You Can Save By Going Solar!
Use The Web's Best Solar Calculator!