Chu discusses progress of solar in the U.S. 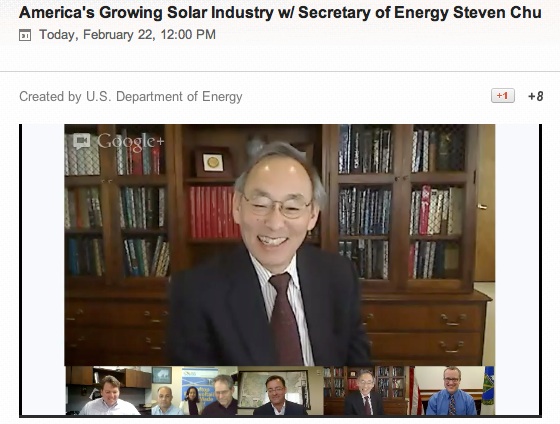 Last Friday (Feb. 22) outgoing Department of Energy Secretary Steven Chu hosted a Google+ Hangout along with a host of solar experts and discussed the progress that solar has made in the past few years. Particularly regarding the progress that the U.S. has made on reducing the costs of solar power and the trajectory the U.S. is on to spread the adoption of more solar.

Since the Obama Administration took office and Chu took over the DOE, and the SunShot Initiative was implemented, the price of solar has fallen precipitously. While some of that is due to the spread of solar throughout the world and the overproduction of solar modules reducing the price of them significantly, much can also be attributed to the SunShot Initiative, which is focussed on more than just the cost of solar modules themselves.

One of the main things the SunShot Initiative is focussed on is reducing the soft costs of solar. As Chu pointed out, “If you break down the cost and think about, the module itself is becoming a commodity price within 5 percent or 10 percent [range in cost difference] internationally,” he said. “Already the soft costs are more than the hardware costs.”

In terms of the differences in price, modules for residences currently cost about $2 a watt, Chu said. Modules for utility-scale projects are even less and dropping in price. “We know we're going to get to 50 cents [a watt]. It's around 80 cents a watt for large-scale production solar modules.…That's a big deal.”

Less than a decade ago utility-scale solar cost about $8 per fully installed watt. “Now its maybe $3, or 2.50 per watt,” Chu said. “The SunShot goal is $1 a watt, for utility-scale solar.” That figure, he said, includes everything for a system. Considering that, currently utility-scale solar is able to sell under power-purchase agreements for rates as low as 10 cents per kilowatt hour.

“The whole idea is within a decade, we will be the world leader, not only in the R&D part, but also in the demonstration, deployment and manufacturing part of these components, because when we get to utility-scale prices, the SunShot goal…to a levelized cost of…roughly 6 cents per kilowatt hour of new power, which will be comparable to the estimate…for new natural gas-powered plants 10 years from now,” Chu said. “That would mean solar is competitive without any subsidy. This is our SunShot.”

The SunShot Initiative is also working to bring down the costs of residential solar. For residences, the project aims to reduces the all-in cost of solar to $2 a watt. “We recognize that this something within grasp. This is not something that's going to happen 20 to 30 years from today. This is something that's going to happen 10 years from today and maybe even sooner,” Chu said of both residential and utility-scale solar.

Approval is expected soon on Gemini, a huge 7,000+ acre solar farm served by Warren Buffet’s NV Energy, thus making it the largest solar farm in all of America. END_OF_DOCUMENT_TOKEN_TO_BE_REPLACED

END_OF_DOCUMENT_TOKEN_TO_BE_REPLACED

END_OF_DOCUMENT_TOKEN_TO_BE_REPLACED
Calculate How Much You Can Save By Going Solar!
Use The Web's Best Solar Calculator!