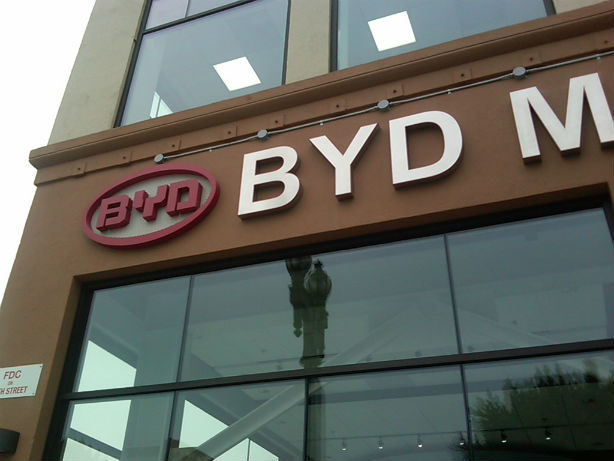 In a time when cities are clamoring for manufacturing facilities and the high-value jobs they bring, one California city lured a major Chinese battery manufacturer to town with its reputation of deep support for clean technology, solar energy and innovation.

BYD, which stands for Build Your Dreams, announced this week that it will establish two manufacturing plants in Lancaster, Calif. The Chinese battery manufacturer, which claims to be the world’s largest supplier of rechargeable batteries, will produce batteries in one of its facilities and electric buses in another, according to a release from the city of Lancaster.

The company recently established its North American headquarters in Los Angeles, about 70 miles southwest of Lancaster.

Lancaster is a city of about 185,000 on the western edge of the Mojave Desert that has in recent years established itself as the greenest state’s greenest city. Per capita, the city has almost twice as much renewable energy capacity, primarily from solar, than any other city in the state.

Earlier this year, the City of Lancaster, Calif. became the first in the country to require all new home construction to include rooftop solar panels.

Lancaster mayor Rex Parris went to China on a trade mission in 2010 and met with BYD leaders. After the visit, Parris developed the “home of the future” project, which brought KB Homes and BYD together to develop the most affordable net-zero production home in the country.

“This innovative use of cutting-edge technology, coupled with the ability of the BYD/KB team to think outside the box to create the most affordable production green energy home our country had ever seen, was truly inspiring,” Parris said. “This cemented the concept in my mind that BYD must be part of Lancaster’s future. Their developing technologies dovetail perfectly with our community’s sustainable energy goals, while also providing stable green jobs for local residents.”

After that, BYD established its headquarters in Los Angeles and signed a $12.1 million contract to produce 10 zero-emissions, all-electric buses for Long Beach, Calif.

BYD purchased the facility and will begin production soon.

“This truly is the best of both worlds,” Parris said. “With this arrangement, BYD benefits from a ready-made, fully-permitted facility which perfectly suits its needs, and will also enjoy access to the expertise of highly trained personnel with extensive experience in the manufacturing industry. Simultaneously, Rexhall staff will enjoy stable, green-sector jobs, along with a significant number of local families who will benefit from the new jobs BYD’s operations will create.”

The World Bank says that the solar floater market when coastal waters are added to it the potential for solar production becomes enormous. END_OF_DOCUMENT_TOKEN_TO_BE_REPLACED

END_OF_DOCUMENT_TOKEN_TO_BE_REPLACED

END_OF_DOCUMENT_TOKEN_TO_BE_REPLACED
Calculate How Much You Can Save By Going Solar!
Use The Web's Best Solar Calculator!