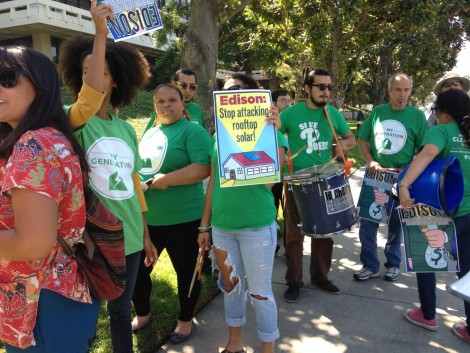 The Arizona Corporations Commission staff recommended this week that the commissioners strike down two proposals from Arizona Public Service Co. that would gut the state’s net metering agreement.

APS, the largest utility in Arizona, has argued that solar customers who sell the excess energy their systems produce to the utility at the retail power rate are driving costs up for those customers who don’t have solar. The utility proposed either cutting net metering payments to less than half the retail rate or tacking on fees that it said would offset the costs of grid maintenance.

Opponents said that either proposal would all but eliminate the financial benefit of installing rooftop solar.

The Arizona solar industry has protested the proposals loudly and nationally, with organizations like The Alliance for Solar Choice (TASC) saying such damaging net metering reversals would destroy the state’s solar industry all together.

TASC and other solar advocates also argue that APS’ premise is flawed and that utility customers are saving the utility more in fuel, transmission and future infrastructure costs than they are burdening the grid or the utility. Several solar advocates have even argued that utilities should pay a premium for distributed generation above the retail rate to compensate home and business owners who install solar for building the utility’s infrastructure and preventing them from having to add generation capacity.

On Monday, the commission staff recommended ruling against both APS proposals. While the staff didn’t dispute either side’s arguments for or against net metering, they said the issue was ill-timed.

The net metering policy should not be altered, the staff report said, at least not until the utility’s next rate case in 2016. The commission staff members felt that the discussion about restructuring net metering policies would make much more sense at that time and could be more logically addressed in the larger context of APS’ entire rate structure.

APS released a statement quoting a handful of excerpts from the report where commission staff supported the utility’s position and made a plea for the commissioners to vote against the staff recommendation when they meet, likely later this month.

“This issue will get worse for customers and harder to solve the longer we wait to address it,” the APS statement reads.

“Eliminating net metering would mean killing the only form of energy competition left after the recent ruling against deregulation,” reads a statement from TASC.

END_OF_DOCUMENT_TOKEN_TO_BE_REPLACED

With the launch of SolarAPP+, it is expected that solar energy suppliers will be more amenable to providing services in remote areas, as it will make it easier to conduct code inspections and ensure compliance to get their requests approved faster. END_OF_DOCUMENT_TOKEN_TO_BE_REPLACED

END_OF_DOCUMENT_TOKEN_TO_BE_REPLACED
Calculate How Much You Can Save By Going Solar!
Use The Web's Best Solar Calculator!