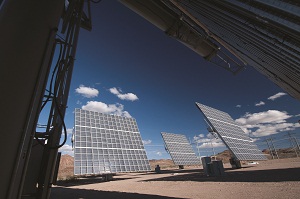 Aided by a $5.9 million American Recovery and Reinvestment Act competitive manufacturing tax credit, the concentrated photovoltaic (CPV) manufacturer, Amonix Incorporated, broke ground on a new 150 megawatt capacity manufacturing facility in the city of North Las Vegas, Nev., on Oct. 28. The facility will help stimulate the green economy in the state.

The solar energy company, based in Seal Beach, Calif., chose Nevada to expand their manufacturing capacity for its sunshine and its solar-friendly government.

“Nevada has been a great friend of ours. We were very pleased with all the support that we had from Mayor Shari L. Buck. The Nevada Economic Development Authority group and several others allowed us to find the right place for the facility,” said Carla Pihowich, senior director of marketing at Amonix. “One of the reasons why we also expanded our manufacturing facility there is to be close to future customers and future deployments, and because Nevada has such an abundance of sunshine, it makes a lot of sense to locate our manufacturing facility there.”

This move was made possible by the Recovery Act, which is intended to stimulate the economy.

“Amonix applied for the investment tax credit, and we were very grateful to receive the $5.9 million from the Recovery Act with the intent to build this new manufacturing facility,” said Pihowich. “That was a big reason behind being able to expand and add to our manufacturing capacity.”

By no means is the government paying for the whole operation, though.

“We also added in around $12 million in private capital,” said Pihowich.

The estimated job creation and benefit to the local economy that will result in the new facility is substantial.

“According to the Nevada Development Authority, we’ll contribute about $118 million in payroll and $12 million in taxes to the local economy in the first five years,” said Pihowich. “So that’s really significant. Through the process from the beginning of construction to completion, about 135 construction workers will be employed, and after that, 278 permanent green jobs will be added in the facility, in manufacturing, production, and some management positions.”

After decades of research, the solar industry has finally started to develope the underlying technology behind “transparent” solar panels. END_OF_DOCUMENT_TOKEN_TO_BE_REPLACED

Sustainable energy sources are rapidly soaring in popularity in different parts of the world. The world's dependence on renewable power sources will significantly increase in the foreseeable future. END_OF_DOCUMENT_TOKEN_TO_BE_REPLACED

Being able to charge your EV with a solar panel roof while you are driving is no longer a fancy dream. END_OF_DOCUMENT_TOKEN_TO_BE_REPLACED
Calculate How Much You Can Save By Going Solar!
Use The Web's Best Solar Calculator!