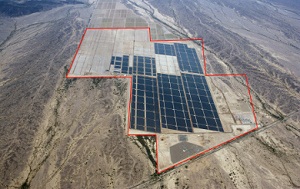 Just 30 megawatts of the 290-megawatt (AC) Agua Caliente solar project is now operational. But that hasn’t stopped it from winning two awards from the solar industry. It was recently was named Solar Project of the Year by Renewable Energy World, a leading industry magazine, and PV Project of the Year by Solar Power Generation USA.

"The editors of the Renewable Energy World network feel strongly that Agua Caliente represents the direction that solar power is taking in North America," said managing editor Jennifer Runyon. "Large-scale solar power will help this region meet its renewable energy goals. For this reason, we were delighted to name Agua Caliente Solar Project of the Year in our 2012 Excellence in Renewable Energy Award program."

Renewable Energy World also observed that the project is a successful example of the DOE’s Loan Guarantee program.

“Critics may be unable to separate the Department of Energy’s Loan Guarantee Program from the Solyndra bankruptcy. A sweeping view of the sprawling Agua Caliente Solar Project on 2,400 acres in the southwest corner of Arizona may give them a different perspective of the program’s legacy,” the publication said.

NRG is—unsurprisingly—pleased with the awards.

“It is especially gratifying to receive recognition from knowledgeable people in the clean energy industry for all the hard work being done on Agua Caliente," said Randy Hickok, NRG Solar’s Vice President, Asset Management. “The excellence demonstrated on this project, not just by NRG but by all our vendors and other partners, including First Solar, will serve as an example of success for many future NRG Solar projects.”

The first phase of the project began producing commercial power in January. Subsequent stages of the project will come online until the plant is completed, with completion slated for 2014. All power produced by the project is under a 25-year power purchase agreement with Pacific Gas & Electric to meet its renewable energy needs in California.

Utility-scale solar power generation is now substantially more efficient in terms of the amount of land it uses for electricity generation than a decade ago. END_OF_DOCUMENT_TOKEN_TO_BE_REPLACED

END_OF_DOCUMENT_TOKEN_TO_BE_REPLACED

END_OF_DOCUMENT_TOKEN_TO_BE_REPLACED
Calculate How Much You Can Save By Going Solar!
Use The Web's Best Solar Calculator!