Genomes, not just for humans anymore: 35,000 materials identified for solar 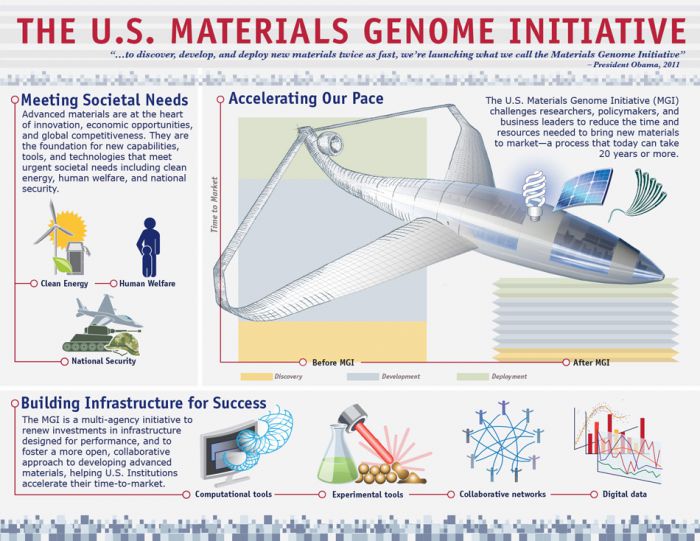 Yesterday, June 24th, the White House’s Office of Science and Technology Policy introduced a new database of 35,000 molecules that could be used in organic photovoltaics. The new database, created by Harvard University, will help researchers more quickly identify potential new technologies that will help speed the development of next generation of organic photovoltaics.

The new database was announced on the second anniversary of the White House’s Materials Genome Initiative. The Obama Administration’s effort to “double the pace of innovation, manufacture, and deployment of high-tech materials.” Which MIT observed can take years or decades, but the initiative aimed to significantly reduce the time identify and deploy such materials.

The now publicly available database was developed as part of the Harvard Clean Energy Project, which is being led by Chemistry Professor Alán Aspuru-Guzik. The project used donated computing power and drawing on quantum mechanic theory to screen 2.3 million organic molecules for photovoltaic properties and applications. It then organized them into a searchable, sortable database.

Harvard’s new database started with 26 molecular “fragments,” based on earlier experiments, showing they could be building blocks for molecules with desirable photovoltaic properties, according to MIT. Using a quantum chemistry model Harvard tested millions of combinations of those fragments for their properties. The Materials Genome Initiative invested $63 million into such efforts this year, fostering collaboration and data sharing among academic and private-sector materials science researchers, MIT said.

IBM’s World Community Grid, which allows people to donate surplus computing power from their own computers to selected projects contributed over 17,000 years of computing time to the project, according to Aspuru-Guzik. With each molecule taking roughly 12 hours to screen.

By virtually screening the materials and coming up with the 10s of thousands of materials that might be suitable for solar power, the research has dramatically cut down the amount of time it would take to physically identify and screen all the materials. “It’s sort of like mapping out what you can do in principle—all the basic properties,” said Gerbrand Ceder, an MIT professor of materials science and engineering—who coined the materials genome term. “Then people can do more targeted engineering.” The materials project is now jointly headed by MIT and Lawrence Berkeley National Laboratory.

END_OF_DOCUMENT_TOKEN_TO_BE_REPLACED

With the launch of SolarAPP+, it is expected that solar energy suppliers will be more amenable to providing services in remote areas, as it will make it easier to conduct code inspections and ensure compliance to get their requests approved faster. END_OF_DOCUMENT_TOKEN_TO_BE_REPLACED
Calculate How Much You Can Save By Going Solar!
Use The Web's Best Solar Calculator!